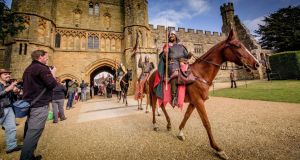 Reenactors arrive at Battle Abbey in Battle, near Hastings, ending their 300-mile cross-country journey in the East Sussex town where the Battle of Hastings was fought 950 years ago. Photograph: Jim Holden/English Heritage/PA Wire 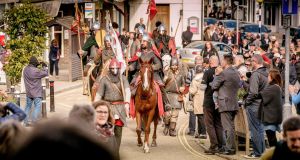 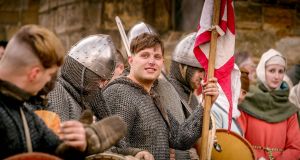 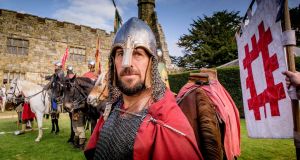 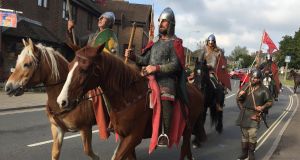 An army of enthusiasts ended their 300-mile cross-country journey on Friday in the English town where the Battle of Hastings was fought 950 years ago.

Their three-week march began in York on September 25th and has taken them south on foot and on horseback in an echo of the journey King Harold made to fight in the battle.

They arrived in Battle on Friday, near Hastings, where on October 14th, 1066, the forces of Harold and Duke William of Normandy met in arguably the most famous battle in English history.

On the eve of the 950th anniversary – while the footsore Anglo-Saxons completed the last stretch of their journey from York – King Harold was packing his Transit van for the journey from Shropshire to meet his fate, as Duke William, with his fine Spanish horse and several hundred knights, arrived by ferry from Normandy.

All converged on Friday on the village in East Sussex that owes its origin and its name to England’s most famous conflict: Battle, where the country’s history changed in 1066 on a high, windy ridge, a few miles inland from where the Normans stepped ashore.

Harold was confident of the outcome: “My money’s on us losing – otherwise there will be a riot.”

The anniversary will be marked in the village by prayers at the stone believed to mark the spot where Harold died, later the site of the high altar of the abbey built in penitence by the man who had become William the Conqueror by the end of the day.

There will also be a service in the parish church partly built with stone from the ruined abbey, parades of schoolchildren and costumed actors, and a YouTube live stream from the site, hosted by the historian Dan Snow, with 50 schools joining in.

The fighting does not start until Saturday, when more than 1,000 costumed re-enactors, including the largest contingent from Normandy led by Michael Sadde as Duke William – who really did have a Spanish horse, a gift from the king of Spain – face up to the army led by Kendall Kinrade as King Harold Godwinson.

On Sunday, weary and battle-scarred, they will do it all again. English Heritage, which manages the site, has already sold all 16,000 spectator tickets for the two days.

Harold in real life is a science teacher in Telford, Shropshire, originally from the Isle of Man, and a member of one of the main Viking reenactment groups. He has played the doomed king for several years.

“It’s a great honour being Harold. I got it, I think, because I’ve got the kit, I’m good at organising a battle – and I’m 6ft 4in, which is taller than the real Harold but means I stand out quite well on the battlefield. I ride in on a horse – which is then led away to join the Norman cavalry – but from then on I’m on foot, and I’ve found the extra reach is very useful in a battle.”

He will die of an arrow in the eye, according to cherished tradition, even though historians long since established that the famous scene in the Bayeux tapestry is a damaged section, originally a spear beside the king’s head. Harold was almost certainly cut down with battle-axe blows by mounted Normans, and was found in a heap of the bodies of his housecarls, his closest bodyguards.

“You can only carry historical accuracy so far,” Kinrade said. “I don’t think the audience would ever forgive me if I didn’t take the arrow in the eye.”

Harold’s army has just made it to Battle without him: a small group left York on September 25th, the anniversary of Harold’s victory over the Vikings at the Battle of Stamford Bridge, recreating the long march to fight again at the south coast.

The march was not entirely authentic: the horses were terrified when they were buzzed by the Red Arrows in Lincolnshire, and the group made a detour to Waltham Abbey in Essex, where Harold is said to be buried after his mother pleaded for his body in return for its weight in gold.

The Normans will win on Saturday as they did in 1066, and win again on Sunday when the battle is refought. The outcome is far less certain for the grudge match, fought by the re-enactors for their own satisfaction in the evening, after most of the spectators have gone.

“Anyone who can still stand, and has the experience – you don’t want the raw recruits in an unscripted battle – can join in,” Kinrade said.

They will abide by the chivalric code of the re-enactors, that anyone struck hard with a blunted sword or battle-axe, “roughly in the T-shirt and shorts area” as Kinrade put it, accepts they are dead and stays dead.

“We’ve done it for the last two years, and the English have won both times,” he said, “but the Normans are quite steamed up about it by now, so it could go any way.”