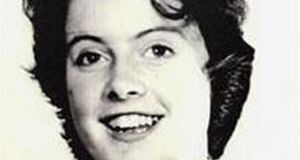 British police have reopened the search for the daughter of Irish migrants more than 50 years after she went missing.

They are appealing for information on Mary Flanagan, who was 16 when she left home in Newham in east London to go to a New Year’s Eve party in 1959 with her Irish boyfriend Tom McGinty.

Her disappearance is the Met Police’s oldest missing person case.

Her sister Brenda, who was eight at the time of her disappearance, is convinced she is still alive and believes that she may have eloped with her boyfriend who worked with the merchant navy as a stoker, shovelling the coal into the steam engine fires.

Described as “bright and friendly”, Mary was 5ft 2in tall and of medium build with hazel eyes. When she was last seen she had dark, wavy hair and a tanned complexion.

“The key to this is finding Tom, if he is still alive,” said detective chief inspector Dave Rock, the investigating officer.

McEntee or McGinty
However Mary’s siblings are not sure if his surname was McGinty or something akin to that such as McEntee or McGuinness – the merchant navy has no record of his name and there is no record of a man of that name on the birth register in the UK.

“We understand her father introduced him to her, so he did exist, it’s just his surname that’s a problem. We believe he was in his early twenties. I spoke to her brother and he is pretty sure the relationship was a genuine one. He was boyfriend or fiance.”

Rock described Mary’s case as a “complete one-off” and said he decided to reopen the inquiry as Mary would have have been 70 in June.

“Rather than just leaving it there letting it run, we decided to reopen it and we’ve opened a number of lines of inquiry. I visited the family yesterday and when you meet them you realise this has dominated their lives,” he said.

They are hoping that publicity in Ireland might raise some fresh clues as to the boyfriend’s origins and might trigger memories in Ireland where Mary could have surviving cousins on her father’s side whose family came from Pass, Co Westmeath.

1950s navy
Brenda said the family had never given up looking and is appealing to anyone who emigrated to England to work in the navy in the 1950s to jog their memories about a man fitting Tom’s description.

“She slept in on the day she went missing. She had had a row with Tom and she was really really upset because he had told her a lie. He had told her the lady that he was living with was his landlady but then admitted it was his mum. She was crying and distressed. She left for work at 1pm and she never came home ... when my dad went to the factory to see if she had turned up for work, he was really shocked because she said she hadn’t been in work for two weeks.

“She mightn’t want to be in touch with us because she fears rejection, but we need her to know that she won’t be rejected. We still hope to find her. If you don’t have hope you don’t have anything,” said Brenda.

If anyone has any information about Mary or Tom’s whereabouts, please call the Newham Police Missing Persons Unit in the UK on 00 44 208 217 5728. Alternatively contact your local gardaí and ask them to get in touch with DCI Cook.