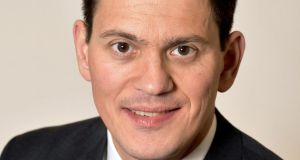 Former British foreign secretary David Miliband has criticised his brother Ed’s general election campaign - but ruled himself out of the running for Labour leader.

Mr Miliband, who runs a charity in New York after quitting British politics when Ed beat him to the Labour leadership in 2010, told the BBC that voters “didn’t want what was being offered”.

He added: “I’m clearly not a candidate in this leadership election, the commitment I have to the job I’ve got doesn’t change.”

He said that, in 2010 and 2015, ex-British prime minister Gordon Brown and then his brother Ed had allowed themselves to be portrayed as moving backwards from “the principles of aspiration and inclusion that are at the absolute heart of any successful progressive political project”.

“The answer is not to go back to 1997, it’s to build on the achievements and remedy the weaknesses, but never to end up in a position where the electorate think you are going backwards rather than addressing the issues of the future.”

Speaking in New York, Mr Miliband said that last week’s election result was “devastating” for the Labour Party and its supporters.

But he said: “There’s absolutely no point in blaming the electorate. Any suggestion that they didn’t ‘get it’ is wrong. They didn’t want what was being offered.”

Asked whether he would return to Britain to put himself forward as a contender to replace his brother as Labour leader, Mr Miliband said: “I’m clearly not a candidate in this leadership election.

“I’m here in New York. I’m running a global charity that’s delivering aid to millions of people around the world. The commitment I have to the job I’ve got doesn’t change as a result of the election.

“What I passionately hope for is that friends and colleagues who are in the UK now will take up the mantle of a dynamic, progressive politics that’s able to speak to millions of people around the country.”

David said he hoped he would be “freer” to take part in the debate about Labour’s future direction in the absence of the “soap opera” surrounding his relationship with his brother.

He added: “The passion I’ve got for Britain and for Labour is undimmed. It’s as strong as ever. But it’s clear that I’m not a member of parliament. I took that decision not to be part of a soap opera over the last five years.

“I wanted Labour to be able to have that debate in a clear way, make its case in a clear way without any sense of distraction from me. And I hope now people can listen to what I say as someone who’s trying to contribute, but obviously isn’t party to the race that’s going on.”

Asked whether he had spoken to Ed since his election defeat, David said: “I’m very happy to say we remain in touch. I think that many of the attacks on him were unpleasant and unfair and I think he dealt with them with enormous dignity and courage.

David brushed off suggestions that his brother lost the election because he failed to attract the middle classes, insisting that progressive politics must be aimed at all classes.

Labour needs to win arguments about “how you have a dynamic economy, how you achieve social reform, how you modernise policy, how Britain needs to play a part in the international system”, he said, adding: “That needs to be done in a way that embraces people rather than divides them.