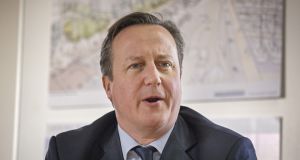 British prime minister David Cameron: seeking to renegotiate Britain’s EU ties before a vote due by the end of next year. Photograph: Jack Hill/Getty Images

British prime minister David Cameron will let government ministers campaign to leave the European Union in an upcoming referendum, a source in his office said on Tuesday.

Mr Cameron is seeking to renegotiate Britain’s EU ties before a vote due by the end of next year. He has said he wants Britain to remain in a reformed EU, but he does not rule out leaving if he can’t get key changes to Britain’s relationship with the bloc.

Europe has divided the Conservatives for three decades. It played a major part in the downfall of Mr Cameron’s two Conservative predecessors, Margaret Thatcher and John Major.

There has been speculation that some Eurosceptic ministers would have resigned as ministers if he had forced them to campaign for membership.

Mr Cameron is due to update parliament on his EU renegotiation later on Tuesday, and a source in his office said he would “give a strong signal” that so-called collective responsibility would effectively be suspended for the EU referendum.

“He will make clear collective responsibility continues to apply all the way up until a deal is done . . . at that point clearly the government will take a position on the deal,” said the source, who declined to be named.

“If there are some individual ministers who want to campaign in a different way, he will make clear that will be accommodated.”

1 Ryanair’s Michael O’Leary under fire for comments on Muslim men
2 Drug dealer loses codes for €53.6m bitcoin accounts
3 Parties to continue talks with Sinn Féin despite Drew Harris’s IRA comments
4 The view from Clondalkin: If Sinn Féin don’t get in, ‘there will be marches’
5 Founder of disabilities network with Irish centres sexually abused six women
Real news has value SUBSCRIBE