David Cameron was caught on camera saying 'Nigeria and Afghanistan, possibly the two most corrupt countries in the world.' Video: Chris Ship/ ITV 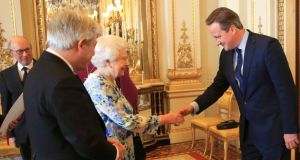 Speaker of the House of Commons John Bercow (left) watches as prime minister David Cameron (centre) is greeted by Queen Elizabeth during a reception in Buckingham Palace, London to mark the Queen’s 90th Birthday. Photograph: PA

British prime minister David Cameron has called Nigeria and Afghanistan “possibly the two most corrupt countries in the world”.

Mr Cameron was caught making the comments as he chatted with the Queen at an event to mark her 90th birthday.

In an apparent reference to the anti-corruption conference he is hosting in London later this week, Mr Cameron can be heard telling the Queen: “We’ve got the leaders of some fantastically corrupt countries coming to Britain.”

Footage published by ITV News of the Buckingham Palace event - where the prime minister is seen chatting in a group including the Archbishop of Canterbury and Commons Speaker John Bercow - was shared on Twitter by ITV News deputy political editor Chris Ship.

Number 10 declined to comment directly on the premier’s conversations with the Queen but pointed out that the leaders of both countries had acknowledged the scale of the problem they faced.

Afghanistan’s Ashraf Ghani and Nigeria’s Muhammadu Buhari have written essays for a book accompanying the summit.

Mr Ghani, they said, acknowledges in his piece that Afghanistan is “one of the most corrupt countries on earth” and Mr Buhari that corruption became a “way of life” in his country under “supposedly accountable democratic governments”.

Mr Cameron said that the summit had been discussed at a “very successful” Cabinet meeting earlier.

The Archbishop - The Most Rev Justin Welby - is heard to intervene to make clear that “this particular president” is not himself corrupt.

Anti-corruption movement Transparency International ranked Afghanistan as 166th and Nigeria 136th out of 168 countries and territories in its Corruption Perceptions Index for 2015.