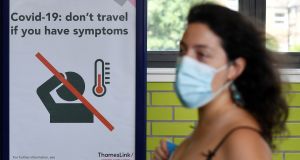 The UK said on Saturday it was pausing its daily update of the death toll from coronavirus after the UK government ordered a review into the calculation of the data over concerns the toll might have been exaggerated.

Academics have said the way that Public Health England (PHE), the government agency responsible for managing infectious disease outbreaks in England, calculates its death figures means they may be distorted compared with those of other parts of the UK.

“Currently the daily deaths measure counts all people who have tested positive for coronavirus and since died, with no cut-off between time of testing and date of death,” a message on the government’s website said.

“There have been claims that the lack of cut-off may distort the current daily deaths number. We are therefore pausing the publication of the daily figure while this is resolved.”

The UK has been the European state worst hit by Covid-19, with an official death toll of more than 45,000. But the government has said international comparisons are misleading because countries record coronavirus deaths differently.

British health minister Matt Hancock on Friday ordered a review into the PHE’s reporting after the academics said patients who tested positive for coronavirus, but were successfully treated, would still be counted as dying from Covid-19 “even if they had a heart attack or were run over by a bus three months later”.

The news comes as Scotland has recorded its largest daily increase in positive coronavirus tests for almost a month. Figures released by the Scottish government show there were 21 new confirmed cases over a 24-hour period as of 2pm on Saturday. It is the highest such number since June 21st, when there were 26 positive test results.

The data also shows there were no new deaths involving someone who had been confirmed as having Covid-19, meaning the confirmed death toll remains unchanged from Thursday at 2,491. A total of 18,422 people have now tested positive for the virus in Scotland.

Meanwhile, Grant Shapps has become the first senior UK politician to break ranks and declare he is taking a summer holiday abroad this year. The British transport secretary said he and his wife, Belinda, had decided to take advantage of the relaxation of foreign office guidance on non-essential overseas travel. “My wife looked at all of these new changes that were made and has now booked a break for the first time for a couple of years,” he told BBC Radio 4’s Today programme. Senior politicians had previously been queuing up to indicate they would be staying in the UK after the coronavirus pandemic threw international travel plans into disarray. – Reuters/PA/Guardian