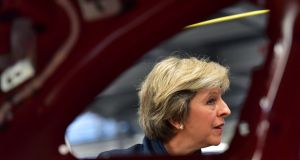 British prime minister Theresa May on a visit to the Jaguar Land Rover factory in Birmingham on Thursday: some of the fog surrounding Britain’s decision to leave the EU has started to lift. Photograph: Carl Court/PA Wire

Ten weeks after the referendum, some of the fog surrounding Britain’s decision to leave the European Union has started to lift, even if the shape of Brexit remains obscure.

At her cabinet meeting at Chequers this week, prime minister Theresa May took a step beyond her declaration that “Brexit means Brexit” to draw a few lines in the sand ahead of formal exit talks.

She ruled out a second referendum and said there was no question of Britain remaining in the EU “by the back door”. And she said that, although the governments of Scotland, Wales and Northern Ireland would be consulted before she triggers article 50 of the Lisbon Treaty, they would not be allowed to veto the move. The same goes for the Westminster parliament, which will not be given a vote on article 50 before the prime minister invokes it.

May made clear that Britain must regain some control over immigration from the EU, although she wants British companies to continue to trade freely with the rest of Europe.

And she said that none of the “off-the-shelf” options for a future relationship with the EU, such as the Norway, Switzerland or Canada models, were necessarily suitable. Instead, Britain should have its very own, bespoke arrangement with the EU after Brexit.

The conventional wisdom before and after the referendum has been that such a bespoke arrangement would not be available to Britain. After all, such thinking goes, Britain cannot be rewarded for backing Brexit by retaining the benefits of EU membership while shirking some of its responsibilities.

But as the European Commission’s Brexit task force sets to work on formulating options for Britain outside the EU, some minds in Brussels are already turning to imaginative alternatives.

The Breugel think tank this week published a paper advocating a partnership which would see Britain leave the EU but maintain almost full access to the single market, while abandoning the commitment to free movement of people.

Although Breugel is an independent think tank, it is at the heart of the European establishment, funded by the EU member states and with a board chaired by former ECB president Jean-Claude Trichet. The paper’s authors include academics Jean Pisani-Ferry and Andre Sapir, and the chairman of the Bundestag foreign affairs committee, Norbert Roettgen.

They acknowledge that Britain must not be allowed to cherry-pick the policies it wishes to participate in but urge the EU to resist the temptation to apply punitive terms to the exit deal. They agree with May that none of the existing models would be suitable for Britain.

“The ‘Norway’ option would not allow limits on freedom of movement for workers, which is likely to be a priority for the UK government. It would also turn the UK into a pure rule-taker, a role that would be inadequate given the size and significance of the UK. Similarly, under the ‘Swiss’ model, the UK would become a pure follower of EU regulation in the sectors in which it would participate,” they say.

They propose an arrangement which is deeper than a free trade deal but shallower than EU membership. Britain would leave the supranational institutions of the EU and its future relationship would be on an intergovernmental basis. There would be no legal right to free movement of workers but there would be an agreed regime to allow limited labour mobility, and Britain would contribute to the EU budget.

“The goal of the proposal is to create a framework for continued close co-operation, even integration, on matters of common interest,” the paper says.

The Breugel authors suggest that the proposed arrangement, which they call a ‘continental partnership’, could form the basis for future agreements with other third countries such as Ukraine and Turkey. It envisages concentric circles of integration, with the euro at the centre, surrounded by the EU, which would in turn be surrounded by the looser continental partnership.

The proposal is unlikely to survive the heat of negotiations between Britain and its EU partners but it has the virtue of understanding and acknowledging the political reality of the Brexit vote.

The referendum was a rejection of EU supranational authority and of the free movement of people, and any future arrangement between Britain and the EU will have to take that political reality into account.