Conflicted Tory leader dips in polls as he struggles with EU, economy and rebels

Terrorism on streets has quietened Tory rebels unhappy with David Cameron’s leadership, but they will return 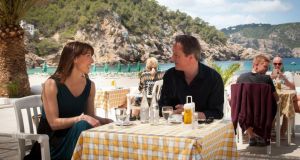 British prime minister David Cameron and his wife Samantha have a drink by a beach during their holiday in Ibiza, Spain on May 26th, 2013. Photograph: Getty

Standing outside No 10 Downing Street last Thursday, following the killing of Drummer Lee Rigby, David Cameron once again showed how good he can be in a crisis.

The words spoken, which he had crafted carefully before coming out to meet the cameras, struck the required notes perfectly – mixing a spirit of indomitability with a refusal to allow terror to change daily lives.

His words did much to calm community tensions in the hours after the brutal slaying.

Cameron’s own people trust him to get such occasions right. His difficulty is that many of them no longer trust him on anything else – be it the European Union, economic reform or gay marriage.

For now, the most toxic of these issues for a significant percentage of grassroots members is gay marriage – a fact that reflects their conservatism and social background but, most of all, their age.

Right-wing image
Watching the destruction of the leaderships of William Hague, Ian Duncan Smith and Michael Howard, Cameron came to the conclusion that the Conservatives had to soften their right-wing image. Most of all, he came to the conclusion that voters will not necessarily vote for the things that they say they want if they believe that by doing so it says unflattering things about them. Hague ran much of his election campaign on saving “The Pound”: the British public agreed that they did not want to get rid of it, but nor did they want to associate themselves with people who came across as zealots.

In 2005, Howard ran a dog-whistle campaign, sending out anti-immigration rhetoric, hang and flog ’em criminal policies and much else (a campaign that Cameron was involved in creating).

Once again, the British public, or much of it, thoroughly agreed with much of what Howard said. However, once again, the package was still less attractive than Labour (and this was two years after the unpopular Iraq war).

Planning his leadership bid, Cameron wanted to take the Conservatives into fresh fields – they would become socially liberal, environmentally friendly, everything that was necessary to convince voters that they had turned over a new leaf.

Since then, so much has changed: the global economy went into a tail-spin; green issues, while vital, do not have the same degree of public support as before, if they cost.

Public mood
On some elements of the debate, Cameron is ahead of the game: Labour has still not won back credibility with the public about its ability to run the economy, while the Conservatives’ welfare cutbacks chime with the public mood.

His determination to introduce gay marriage will lose him foot soldiers in Conservative associations and encourage the drift to the UK Independence Party, while winning him soft support from previous detractors. The difficulty is, however, that it will not on its own make Conservative voters of people who would otherwise not be so – voters that Cameron urgently needs since he failed to redraw constituency boundaries in his favour.

Meanwhile, a majority of his backbenchers loathe him, believing that his promises of a referendum on EU membership are worthless, while arguing that his running of No 10 is chaotic.

On the first charge, his enemies have a point, of sorts. Like many of them, he would happily leave the EU if he could, but he believes he cannot, so he will not do so, though that could change if events change.

On the second, his enemies have even more of an argument. Entering power, Cameron decreed that the Labour era of powerful special advisers was no more. All would be clean and good in Cameron’s world.

He soon learned that special advisers – good ones, at any rate – are vital in 21st-century politics if the often moribund ship of state is to be turned to face into new waters, though it is arguable that he has filled the gaps.

His principal problem, however, is one that he can do nothing about: a significant majority of his backbenchers have refused psychologically to accept the arithmetic of the 2010 election. Cameron vowed he would take them to the promised land of majority government. Having failed in that he is for many of them an apostate never to be forgiven, or believed.

With a stuttering economy, Cameron is behind in the polls – though, in truth, it would be a lot worse if Labour’s Ed Miliband had only connected with the British public, which he has, so far, pretty signally failed to do.

Again and again, Conservative backbenchers have come forward demanding more of a pound of flesh from Cameron on the EU – a promise of a referendum; then legislation guaranteeing it. Some now want it held immediately.

Curiously, Cameron, at one level, needs the backbenchers’ revolt, so that he may argue to fellow EU leaders if he ever gets to the point of negotiating concessions that he cannot go home without meaningful changes.

A question of tone
However, it is, as ever, a question of tone. More of the British now than ever agree that the UK’s current deal with Brussels is not sustainable, even if they have different ideas about what to do.

But the more demanding now have another home to go to: the UK Independence Party, which can, for now, live in a world where all things are possible and every demand can be satiated.

Cameron does not live in such a world, requiring him to couch his declarations in caveats – thus reinforcing the very image of compromise, obfuscation and weakness that his enemies so hate.