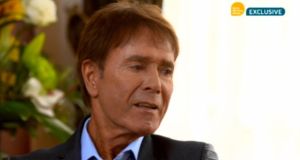 Video grab of Sir Cliff Richard speaking to Susanna Reid on ITV’s Good Morning Britain, where he said there “must have been illegal collusion” behind events that culminated in a police raid of his home being broadcast live on BBC News. Photograph: ITV/PA Wire

Sir Cliff Richard has said there “must have been illegal collusion” behind events that culminated in a police raid of his home being broadcast live on BBC News.

The singer said he was considering taking legal action for the “gross intrusion” into his privacy which saw him named as part of a criminal investigation without ever being charged.

Sir Cliff has described how, while at his Portugal vineyard in August 2014, he discovered with horror that footage of detectives searching his Berkshire home was being broadcast live on television.

The BBC has apologised for causing the 75-year-old distress as a result of the coverage that he earlier said made him feel like he was “going to die”.

South Yorkshire Police have also apologised over their handling of the investigation after the Crown Prosecution Service decided to drop the case.

Sir Cliff indicated to ITV’s Good Morning Britain that he may seek compensation in the courts.

He said: “There must have been illegal collusion. I’ve never known, I don’t think, investigations take place with lighting and cameras and special angles for the helicopter - it just seems ridiculous.

“I feel I have every right to sue because, if nothing else, definitely for gross intrusion of my privacy.”

The veteran entertainer said he felt like “collateral damage” resulting from the wave of police investigations into high-profile sex abuse allegations sparked by the Jimmy Savile scandal.

Those under investigation for sexual crimes should not be named unless charges are brought, he told the programme.

Sir Cliff said he understood why children who make allegations are granted anonymity.

However, he added: “My accusers were all men, grown-up men who were probably in their 40s and into their 50s. I don’t see why they should be protected.”