The trailer for the latest Top Gear series was released featuring cars from the Audi R8 to Reliant Robin. Video: BBC 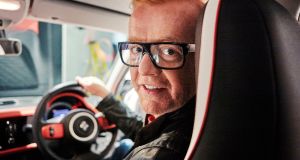 Chris Evans behind the wheel for Top Gear. He found his feet in his career and became a household name back in 1992 as one of the hosts of Channel 4’s hit television show, The Big Breakfast, alongside Gaby Roslin. File photograph: Alex Howe/BBC/PA Wire

Top Gear should have been the crowning glory of Chris Evans’s radio and TV career, which began when he was just 17.

Starting at Piccadilly Radio in Manchester, he soon moved to London and worked his way up from graveyard shifts on BBC’s Greater London Radio, through Radio 1 and to his own show on the newly-launched Virgin Radio.

But he truly found his feet and became a household name in 1992 as one of the hosts of Channel 4’s hit television show, The Big Breakfast, alongside Gaby Roslin.

Evans left to found his own production company Ginger Productions in 1993 and went on to create popular TV show, Don’t Forget Your Toothbrush.

In 1995 he took over hosting Radio 1’s flagship breakfast show and soon drew in 7.5 million listeners a week, expanding his already A-list profile even more.

His contract allowed him to continue working on TV and a year later he launched TFI Friday on Channel 4 to huge success.

Stepping down from Top Gear. Gave it my best shot but sometimes that's not enough. The team are beyond brilliant, I wish them all the best.

With his fame came an unlikely sex symbol status too, with Evans famously pairing with the likes of Kim Wilde, Geri Halliwell and Melanie Sykes after the breakdown of his first marriage to Loose Women presenter Carol McGiffin.

Professionally, however, his career began to wane as he fell out with Radio 1 over his demands and behaviour that included taking his staff on a 17-hour pub-crawl which ended just two hours before he was due on air.

He walked out in January 1997 after they refused his demand for a four-day working week to focus on his TV show.

A few months later he moved to Virgin Radio, which he had bought by the end of the year.

But his magic touch was failing fast, and after selling to Scottish Media, he was sacked in 2001 for “breach of contract” after failing to turn up for work after several highly-publicised drinking sessions with his then-wife Billie Piper.

Evans stepped away from the limelight until 2005, when he began presenting on BBC Radio 2 and where he has had a show for the last 10 years after taking over from Sir Terry Wogan.

In 2010, he joined The One Show as a part-time presenter, before quitting last year for his new role on Top Gear, taking over from disgraced presenter Jeremy Clarkson and sidekicks James May and Richard Hammond.

The popular BBC motoring show should have been the second wind in his career, but after just one series dogged by lower-than-expected ratings and controversial stunts, Evans stepped down from his new role, saying his best shot was “not enough”.

He is currently married to golfer Natasha Shishmanian, with whom he has two young children.