‘I am concerned about it, of course, but I am not frightened of it’ 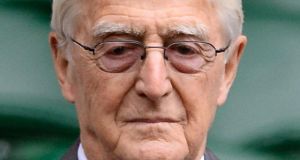 The television presenter (78) is currently undergoing radiotherapy for prostate cancer but said he confident of fighting the disease and returning to full health.

In an interview, Sir Michael said: “It was a great shock, but I have been told to expect to make a full recovery.”

Sir Michael, affectionately known as “Parky” to his legion of fans, was diagnosed with the disease in May after a routine health check. Doctors immediately began organising his treatment, which involves five sessions of radiotherapy a week.

The renowned journalist and interviewer said he was left in shock by the diagnosis, but said he was “in wonder” at the “marvelous” work of medical staff after initial thoughts of his own mortality. He said: “I had to start calling a few of my social engagements to tell them I couldn’t do it - what do you say to them? “When you are told you have something like cancer, it is a shock.

“But the cancer specialist said: ‘I will assure you, you will not die of this.‘ “I am concerned about it, of course, but I am not frightened of it.”

Sir Michael said he continues to live “a normal life”, aside from the “distraction” of the radiotherapy. The chat show king described his treatment as “extraordinary”, and said he found the process free from pain and discomfort.

He said: “If anything, it’s boring. “You have to lie there completely still, for six minutes. “But I have had no side-effects at all.” Sir Michael said the cancer is contained to his prostate, and that he should be “completely free” of the disease by August.

And he urged men to pay greater attention to their health in order to catch potential diseases early - with a simple test to check for prostate cancer.

“The test is if you can pee against a wall from 2ft, you haven’t got it,” he said. “I don’t want to trivialise it, but men know when there’s a problem. “I have been lucky, but men are silly about their health. “Get it checked out - it might be something else.” Sir Michael’s career has seen him welcome the likes of Muhammad Ali, David Beckham and Rod Hull with puppet Emu - onto his chat shows during a long and distinguished career. And he said he had no intention of letting cancer get in the way.

“I’m 78 and I have had a good life,” he said. “When you get involved in this, you begin to understand the extraordinary work of those involved in treating cancer.

“You just sit and look at them in wonder. They do the most extraordinary things, and I am very grateful. “I shall be around for a while yet, to the delight of my friends and the dismay of my enemies.”