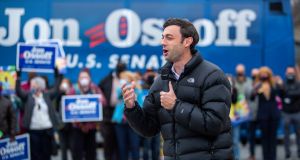 Democrats’ hopes of winning two US Senate run-off races in Georgia and regaining control of the upper chamber of Congress have been boosted by clashes between Donald Trump and Republicans over stimulus payments.

The polls next Tuesday pit Republican incumbents David Perdue and Kelly Loeffler against Democratic challengers Jon Ossoff and Raphael Warnock. The run-offs were required under state law because no candidate in either race received 50 per cent of the vote in the November 3rd election.

Control of the Senate hangs in the balance, and with it the prospects for president-elect Joe Biden to push his agenda through Congress, where the Democratic Party controls the House of Representatives. If Democrats win both Georgia races, the Senate would be split 50-50, giving Kamala Harris, as vice-president, the tiebreaking vote.

Trump has cast a shadow over the Georgia races by breaking with his party and pushing for $2,000 (€1,640) stimulus payments to most Americans adults – even after he signed into law a $900 billion stimulus bill that included means-tested $600 payments.

While the Democrat-controlled House this week approved the $2,000 payments, Mitch McConnell, Republican Senate majority leader, said late on Wednesday that the proposal had “no realistic path to quickly pass” in the Republican-majority upper chamber of Congress.

National public opinion polls show the majority of Americans support the bigger payouts – and in Georgia, political operatives are warning that Democrats have been effective at placing the blame for Washington’s stalemate squarely on congressional Republicans.

A survey of likely Georgia voters conducted last month by Data for Progress, a progressive pollster, found that 63 per cent said they would be more likely to vote for a candidate who supported an additional coronavirus relief cheque, compared with 10 per cent who said they would be less likely.

“It is being played pretty heavily here that Republicans don’t care about you, and don’t want you to have assistance during this crippling pandemic, and Democrats do,” said Bill Crane, a veteran political analyst in Atlanta who has worked for candidates in both parties. “Those are the messages that are getting a lot more airtime, a lot more pick-up.”

More than 2.5 million people in Georgia have voted early in the two Senate run-offs, either in-person or by mail, according to the University of Florida’s US Elections Project. Hundreds of thousands more are expected to cast their ballots in person on Tuesday, setting a state record for voter turnout in a run-off. Run-offs tend to attract fewer voters than general elections.

Almost five million people voted in the November 3rd election in Georgia, which resulted in Biden becoming the first Democratic presidential candidate to win the southern US state in almost three decades. Biden defeated Trump in Georgia by a margin of fewer than 12,000 votes, leading the president to make baseless claims that the result was rigged against him.

Democrats and Republicans agree that the two run-offs are also likely to be decided by narrow margins. A FiveThirtyEight average of recent polls shows Ossoff leading Perdue by one percentage point, and Warnock leading Loeffler by two points – both within the margin of error.

Ossoff and Warnock, who are running co-ordinated campaigns, have made economic relief a core message, first calling for $1,200 stimulus cheques to be included in the package that Trump approved on Sunday.

The Democrats upped their demands this month after Trump called for $2,000 payments and Nancy Pelosi, the Democratic speaker of the House, endorsed his request.

Perdue and Loeffler initially stayed quiet on the stimulus cheques, and McConnell reportedly only signed on to $600 direct payments amid growing concerns about the Georgia races.

The New York Times first reported two weeks ago that McConnell said in a private phone call that the Republicans were “getting hammered” for lawmakers’ failure to agree on another round of economic relief.

After a deal was reached on Capitol Hill shortly before Christmas, Perdue and Loeffler championed the relief bill – before changing their tune this week to remain in lockstep with the president.

In separate Fox News channel appearances on Tuesday, both Republicans said they had decided to endorse the $2,000 payments. Perdue said it was “the right thing to do for people in Georgia”.

Ossoff accused his Republican opponent of caring “about himself, not the people of Georgia”. Warnock struck a similar tone, saying Georgia voters could not “trust Kelly Loeffler to look out for anyone but herself”.

GOP strategist Doug Heye said the Republican senators had made a calculated decision to curry favour with Trump, who continued to enjoy support from his rightwing base and was scheduled to hold a rally in rural Georgia on the eve of Tuesday’s elections.

Trump this week tweeted that Republicans “must approve” the $2,000 payments “unless [they] have a death wish”.

“[Perdue and Loeffler] feel that they have to be exactly where Donald Trump is,” Heye said. “It is very easy to see how he could lash out at one of those two, or both of them, and that could cost them the race ... In a run-off, the one thing that they cannot afford is to have Donald Trump criticise them.” – Copyright The Financial Times Limited 2020