Cameron and Johnson at war over EU peace-keeping role 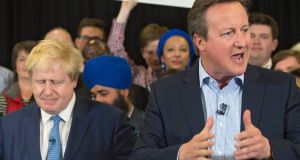 Boris Johnson and David Cameron: Cameron said whenever Britain turned its back on Europe it sooner or later came to regret the decision while Johnson accused him of scaremongering. Photograph: Will Oliver/EPA

The two sides in Britain’s referendum campaign have clashed over the EU’s role in maintaining peace, after David Cameron warned that a British exit from the EU could make another European war more likely.

Former London mayor Boris Johnson accused the prime minister of scaremongering and suggested that the EU was to blame for provoking Russia’s invasion of Ukraine.

Speaking to an audience of politicians and diplomats at the British Museum in London, Mr Cameron made what he described as a “big, bold patriotic case” for Britain’s continued EU membership. He said that history had taught Britain that, whenever the country turned its back on Europe, it sooner or later came to regret the decision.

“The serried rows of white headstones in lovingly tended Commonwealth war cemeteries stand as silent testament to the price that this country has paid to help restore peace and order in Europe. Can we be so sure that peace and stability on our continent are assured beyond any shadow of doubt? Is that a risk worth taking?” he said.

Describing leaving the EU as “an abject act of national retreat”, the prime minister noted that all Britain’s international allies wanted the country to remain in the EU. And he warned of the potentially dangerous consequences of weakening the EU by withdrawing and triggering a political crisis in some of the remaining member states.

“As I sit around that table with 27 other prime ministers and presidents, we remember that it is pretty extraordinary that countries are working together to solve disputes and problems. We should listen to the voices that say Europe had a violent history, we’ve managed to avoid that and so why put at risk the things that achieve that?” he said.

Mr Johnson said the EU had made the situation in the Balkans worse during the 1990s by moving too soon to recognise Croatia, and he appeared to blame the EU’s negotiation of an association agreement with Ukraine for Vladimir Putin’s invasion of the country.

“If you want an example of EU foreign policy-making on the hoof, and the EU’s pretensions to running a defence policy that have caused real trouble, then look at what has happened in Ukraine. I think it is very, very important that we don’t muddle up the role of the EU with the role of Nato, ” he said.

Mr Johnson said that the European vision of Jean Monnet and Robert Schuman had failed because there was no common political culture in Europe, no common media and no knowledge of one another’s politics. Far from achieving political cohesion, deeper European integration had produced the precise opposite, as the rise of far-right nationalist parties showed.

“In Austria the far-right have just won an election for the first time since the 1930s. The national front are on the march in France, and Marine le Pen may do well in the presidential elections.

“You could not say that EU integration is promoting either mutual understanding or moderation, and the economic consequences range from nugatory to disastrous,” he said.

“Boris Johnson has plumbed new depths today by joining the likes of Farage, Le Pen and Wilders in blaming the EU, rather than Vladimir Putin, for what has happened in Ukraine. If further evidence were needed about the careless disregard for our security demonstrated by Leave campaigners – by being a Putin apologist – Johnson has provided it,” Mr Straw said.