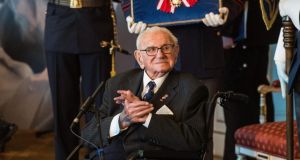 A Briton who saved hundreds of children from the Nazis has been honoured by the Czech government.

Sir Nicholas Winton organised the rescue of 669 children, mainly from Jewish families, by train from Prague in 1939.

The 105-year-old, who has been dubbed the “British Schindler” for his actions, received the Order Of The White Lion in a ceremony in the Czech capital.

Sir Nicholas organised eight trains from Prague to London and helped to find foster families for the children when they arrived in England.

After being presented with the honour by Czech president Milos Zeman, Sir Nicholas said: “I thank the British people for making room for them, to accept them, and of course the enormous help given by so many of the Czechs who at that time were doing what they could to fight the Germans and to try and get the children out.

“In that respect, I was of some help and this is the result.”

Sir Nicholas, from a German Jewish family, told BBC Radio 4’s Today programme he was well aware of the urgency of the situation in 1939.

“I knew better than most, and certainly better than the politicians, what was going on in Germany. We had staying with us people who were refugees from Germany at that time. Some who knew they were in danger of their lives.”

On his 105th birthday earlier this year the founder of the Czech Kindertransport operation was given a cake and card at his home in Maidenhead by newsreader Natasha Kaplinsky, who is a member of the Prime Minister’s Holocaust Commission.

He was also visited by Vera Schaufeld, one of the children he saved.