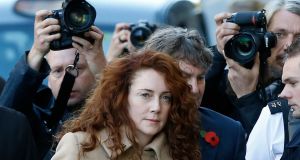 Jury selection began today in the trial of Rebekah Brooks and Andy Coulson for charges linked to phone hacking and alleged corrupt payments to public officials.

Former News International chief executive Ms Brooks and ex-government spin doctor Mr Coulson, both 45, appeared at the Old Bailey for the first day of proceedings that could take up to six months.

A panel of around 80 potential jurors were brought into wood-panelled court 12 at around 12.30pm, and whittled down to 33 possible panel members.

They were asked to fill in a questionnaire and given until tomorrow to make sure that they can commit to the full length of the trial.

Mr Justice Saunders told them: “The trial which we are about to start will take a considerable length of time. It is estimated that the case may last until Easter. I hope that with the assistance of counsel the case will finish more quickly, but people who sit on it should be prepared for the case to go on that long.”

Seats had to be removed from the courtroom to allow the potential jurors to fit into the space.

The judge added: “To sit on a jury for this length of time, five or six months, is a significant disruption in people’s lives and we do appreciate that. We do need the assistance of members of the public like you to try this case. It is, as you will hear, an important case and we have to find a jury able to try it.”

He told them that jury service “is a public duty and is not voluntary”, and added: “It’s critical to the jury system ... that a jury takes the case free from any preconceptions. From now on you do not discuss the case with anyone.”

Ms Brooks of Churchill, Oxfordshire, and Mr Coulson from Preston in Kent, are both accused of conspiracy to intercept communications in the course of their transmission.

They are accused of conspiring with former News of the World (NOTW) head of news Ian Edmondson (44) from Raynes Park, south-west London, the tabloid’s ex-managing editor Stuart Kuttner (73) from Woodford Green, Essex, and others to illegally access voicemails between October 3rd, 2000 and August 9th, 2006.

Ex-NOTW and Sun editor Ms Brooks is also charged with two counts of conspiring with others to commit misconduct in public office, one between January 1st, 2004 and January 31st, 2012 and the other between February 9th, 2006 and October 16th, 2008, linked to alleged inappropriate payments to public officials.

She faces another two allegations of conspiracy to pervert the course of justice — one with her former personal assistant Cheryl Carter (49) from Chelmsford in Essex, between July 6th and 9th, 2011. It is alleged that they conspired to remove seven boxes of material from the News International archive.

The second count alleges that Ms Brooks, her husband Charles Brooks and former head of security at News International Mark Hanna conspired together and with others between July 15th and July 19th, 2011 to pervert the course of justice.

It is claimed that they tried to conceal documents, computers and other electronic equipment from police officers who were investigating allegations of phone hacking and corruption of public officials in relation to the News of the World and The Sun newspapers.

Former Number 10 spin doctor and ex-NOTW editor Mr Coulson is also facing two allegations that he conspired with the tabloid’s former royal editor Clive Goodman (56) from Addlestone in Surrey, and persons unknown to commit misconduct in public office — one between August 31st, 2002 and January 31st, 2003; and the other between January 31st and June 3rd, 2005.