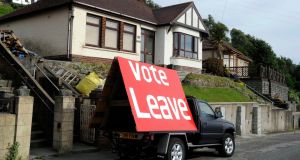 A sign is displayed opposite the M4 near Tata Steel works, on the day of the EU referendum, in Port Talbot, Wales. Photograph: Rebecca Naden/Reuters

For two weeks Wales has been celebrating its European presence. There was jubilation when our football team thrashed Russia to top group B at the European Championship, storming past England. Eyes are now firmly focused on Saturday’s match in Paris against Northern Ireland, not least in the home of Wales’s first minister, Carwyn Jones, who is married to a Catholic from Belfast. No-one in Wales wants an early European exit from the football. But political Europe is now another matter altogether.

After Wales rejected an Assembly in 1979, one commentator recalled seeing anguished devolutionists shouting at the television for giving them the wrong result. Many similar sightings have been reported overnight as the people of Wales rejected the advice of the two political parties that dominate the national assembly, Labour and the Welsh nationalist party Plaid Cymru, and joined England in voting to leave the European Union.

This morning (Friday), the first minister said that he was “deeply disappointed” with the referendum result – and said that he had never been convinced of the need for the referendum. He set out six objectives for his government in response to the referendum result – the protection of jobs, full participation in discussions on the timing and terms of withdrawal from the EU, maintained access to the single market, continued participation in Common Agricultural Policy and Structural Funds up until 2020, a renegotiation of the funding formula for Wales taking account of the loss of EU funding following withdrawal and a redrawing of the constitutional settlement in the UK.

Throughout the campaign, activists for Remain have stressed the benefits that Wales gets from Europe. Independent analysis by Cardiff University’s Wales Governance Centre showed that Wales is a net beneficiary of the EU: in 2014 the net benefit to Wales of being in the EU was £245 million, or £79 per person.

More than £2 billion for farming and the countryside has been destined for Wales in the 2014-2020 period, and a further £2 billion plus in cohesion funding for the poorest areas of the country – paradoxically some of the areas which voted most heavily to Leave. Business in Wales, as in the UK overall, including companies such as Airbus and Toyota, has been firmly in support of the Remain campaign. Analysts will be totting up the impact of the vote on Welsh exports – not least Welsh lamb, beef and dairy products – to Ireland and other parts of Europe.

The two most popular Welsh politicians have campaigned together on the Remain side: Labour’s first minister has shared platforms with the leader of the opposition in the national assembly, Plaid Cymru’s Leanne Wood. The Conservatives in Wales have been as divided as their colleagues in Westminster, with the secretary of state Alun Cairns backing his leader David Cameron but the Tory leader in the national assembly, Andrew RT Davies, despite his own farming business benefitting from EU subsidies campaigning for Brexit.

In some areas, such as the Rhondda, traditional Labour-Plaid rivalries were set aside as the two parties campaigned together. But it was not enough: Rhondda Cynon Taf voted to leave, like other valley communities such as Merthyr, Blaenau Gwent, Caerphilly, Neath Port Talbot and Torfaen. Perhaps this was unsurprising: the academics who have specialised in analysing the rise of Ukip, Prof Matthew Goodwin and Prof Rob Ford, identified the Rhondda and Blaenau Gwent as the two Labour seats most likely to be sympathetic to Ukip in an analysis they published in 2014.

Their rationale was that these were precisely the kind of post-industrial areas – former mining or steel-producing areas which had lost jobs to globalisation – white working-class areas which have lots of “left behind” voters who were the most receptive to Ukip and its policies. These areas have suffered the impact of austerity policies over the last six years – and it has been Labour councils which have had to implement the cuts imposed by Westminster. In May’s Assembly election it was Plaid Cymru that hoovered up the protest vote in both seats, winning in Rhondda and coming close in Blaenau Gwent. But valleys voters have shown they are quite capable of expressing a political protest by voting Plaid Cymru in an assembly election while plumping for a ‘Leave’ vote in the EU referendum. Ukip has done well in European elections in Wales over the last decade and won its first seats in the national assembly last month.

One issue dominated Welsh politics in the first six months of this year – the crisis in the steel industry. Ukip and those pushing a leave vote took the line that steel could not be saved in an EU which blocked necessary state support and tariffs on cheap Chinese steel. The first minister and others have pointed out that other EU member states have been able to take action to protect their steel industries.

Meanwhile, the word sovereignty has been heard on the doorsteps, expressed as a desire for “regaining control”, in the language of the Leave campaign. However, the biggest driver of the Brexit message was immigration, in Wales as in England. This wasn’t just an issue in the urban areas of Wales with the most recent experience of immigration – the issue surfaced just as often in valley areas where postwar immigration had been minimal.

Immigration was a proxy for a variety of other fears – about pressures on public services and the alleged under-cutting of wages, about the insecurities of change driven by globalisation – and was ruthlessly exploited by the Leave campaign who said that immigration levels could not be controlled within the EU.

Over the last fortnight, the most experienced Remain campaigners, such as former secretary of state for Northern Ireland Peter Hain, had been very nervous about the outcome, but early on Thursday evening Hain said he was hopeful that things were swinging back to Remain.

Postal votes went out early in this campaign and Hain and others had stories of people who had voted by post to Leave but regretted it and to compensate were now seeking to persuade others to vote for Remain. It wasn’t to be.

Welsh Remain campaigners believe that above all, this has been an anti-establishment vote – a populist revolt against the political elites, almost a vote against politics itself. The referendum has certainly exposed a serious division between the leadership of the national assembly – both the Welsh Labour government and Plaid Cymru as the official opposition – and the majority of the people of Wales.

In March, the first minister warned of a UK constitutional crisis if England voted ‘Leave’ and Wales, Scotland and Northern Ireland voted ‘Remain’, and Plaid Cymru’s leader had argued that Brexit should only occur if all four parts of the UK voted to leave, assuming that without such a lock, England might drag Wales out of Europe. Instead, Wales has voted to leave in its own right.

Looking across the nation, beyond the valleys, Pembrokeshire, Anglesey, Powys and Wrexham and the northeast of Wales voted to leave, not unexpectedly. Against expectations, Bridgend, Swansea and Carmarthenshire voted to leave. Cardiff, along with Monmouth, the Vale of Glamorgan, Gwynedd and Ceredigion, voted to remain.

So Wales joins England in voting to leave while Scotland and Northern Ireland vote to remain. A couple of years after that 1979 referendum when Wales voted against having a national assembly, the historian, the late Gwyn Alf Williams, wrote that “We Welsh look like being the last of the British. There is some logic in this. We were, after all, the first”. Williams meant then that Wales had opted for the status quo of the unreformed British state. This week, Wales’s British identity asserted itself over its European identity, even as the nation’s football team was striding out on the European stage. No-one knows what comes next.

Leighton Andrews was the Welsh government’s minister for public services until May. He voted Remain.