Brexit Voices: It’s hard to make an economic case for leaving the EU 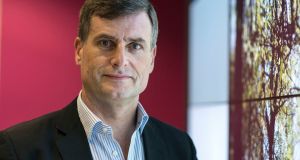 Telefonica UK chief executive Ronan Dunne, who moved to the UK from Ireland in 1987, recently signed a letter published in the Times which said leaving the EU would deter investment, threaten jobs and put the UK economy at risk. Photograph: Dave Meehan.

Ronan Dunne joined the heads of some of Britain’s biggest companies in signing a letter in support of the UK staying in the European Union, but does not want to tell people how to vote.

Dunne, who moved to the UK from Ireland in 1987, is now the chief executive of Telefonica UK - more commonly known as o2. Last month he signed a letter which said leaving the EU would deter investment, threaten jobs and put the UK economy at risk.

“What there strongly is, is a strong economic case for being in. There are clear benefits for being in. I am not trying to say to people how to vote. I think that is highly inappropriate for business people to say. But what I think is that business people should contribute to the fact pack so there is a proper fact based debate about this,” he says.

Dunne is a prominent figure in the UK’s business community after almost three decades in various senior roles. Alongside the chief executives of Easyjet, Shell and Marks & Spencer, Dunne put his name to the letter published in the Times which said: “Britain will be stronger, safer and better off remaining a member of the European Union.”

“When you break it down to the pure economics of it, I think it is hard to make an economic case and that is where my role as a business person is, to offer a view from an economic case,” says Dunne.

There have been dissenting voices amongst some in the business community in Britain. The director of the British Chambers of Commerce, John Longworth, resigned after he was suspended from the organisation for breaching an official neutral line, saying that the UK’s prospects outside the EU could be brighter.

For Dunne, an Irishman who heads a wholly owned subsidiary of the Spanish telecommunications giant Telefonica, the decision on whether to stay or leave is clear. The company hosted prime minister David Cameron at its headquarters in Slough as part of his campaign to remain within the EU, although Dunne says they would also welcome someone from the campaign to exit to address staff.

“As an Irishman and an Irish citizen, I think Ireland has been a net beneficiary of membership of the EU. I personally believe that the development of the peace process and the Good Friday Agreement had been helped by the economic impact of access to the European market and the improving economic circumstances of people both north and south,” he said.

More so than other offices in central London, there is a distinct international feel to the Telefonica surroundings, reflecting its Spanish ownership. On an exit, the issue of filling jobs in the digital sector with appropriate staff would arise, he said.

“One of the questions that businesses are interested in is we have free access to European skills at the moment. If Britain were to exit - and immigration is one of the questions that is on people’s minds - if there are barriers put up that means that British business can’t get access to the same high tech skills as some of it competitors, then we would be at a competitive disadvantage and then that would affect us as a domestic business as well as it would affect people who were exporters.”