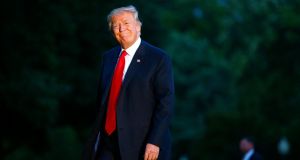 US president Donald Trump arrives back at the White House in Washington, DC, after the G20 summit. Photograph: Al Drago/The New York Times

A savage opinion of Donald Trump’s presidency delivered by one of Australia’s most seasoned political journalists has gone viral.

Chris Uhlmann, the political editor of the government-funded Australian Broadcasting Corporation (ABC), described Mr Trump as “isolated and friendless” at the G20 leaders’ summit, adding that his disastrous foreign policy had “pressed fast-forward on the decline of the US”.

The analysis, delivered on the ABC political programme Insiders, has been viewed thousands of times around the world, and astonished American political commentators.

Speaking on Sunday from the G20 conference in Hamburg, Mr Uhlmann said Mr Trump had shown “no desire and no capacity to lead the world” and was himself “the biggest threat to the values of the West”.

“He was an uneasy, lonely, awkward figure at this gathering, and you got the strong sense that some of the leaders are trying to find the best way to work around him,” Mr Uhlmann said.

“Where was the G20 statement condemning North Korea which would have put pressure on China and Russia? Other leaders expected it, they were prepared to back it, but it never came.”

Mr Uhlmann said Mr Trump was obsessed with “burnishing his celebrity” and had “diminished” his own nation to the benefit of Russia and China.

“We learned that Donald Trump has pressed fast-forward on the decline of the US as a global leader. He managed to isolate his nation, to confuse and alienate his allies and to diminish America.

“[He is] a man who barks out bile in 140 characters, who wastes his precious days as president at war with the West’s institutions like the judiciary, independent government agencies and the free press.”

Mr Uhlmann has been the national political editor of ABC news since 2015, and won a Walkley award, Australia’s highest journalism honour, for broadcast interviewing in 2008.

He caused controversy in Australia in 2016 when he blamed the South Australian state blackout on wind power and renewable energy, even though scientists disputed the claim.

Mr Uhlmann refused to apologise despite attracting complaints, and likened himself to a heretic being burned at the stake.

In February that year he also published an essay that said the “intellectual virus” of Marxism was destroying the culture of western society.