A frictionless Border is impossible, an invisible one undesirable 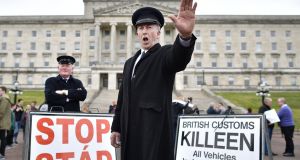 Men dressed as customs officers take part in a protest outside Stormont against Brexit and its effect on the Border. Photograph: Charles McQuillan/Getty Images

Michel Barnier’s recent dismissal of the notion of “frictionless” trade between the UK and EU after Brexit has direct ramifications for one of the most complex problems faced by the Brexit negotiators: how to manage the Irish Border.

The UK government has frequently emphasised its desire to see the continuation of the “seamless frictionless Border” with the Republic of Ireland after Brexit and, more recently, David Davis has affirmed the UK government’s desire to maintain an “invisible border” between the UK and Ireland. For its part, the European Union has expressed a commitment to “working hard to avoid a hard Border” and a desire to find “flexible and imaginative solutions” to achieve this.

The cautious realism of the EU on this front is notable: a “hard” Border is a real possibility, and a “frictionless” Border is almost an oxymoron. A hard Brexit would mean that the Irish Border would be a frontier to the free movement of people, goods, services and capital that is a feature and condition of membership of the EU.

For the UK’s land Border with the EU to remain frictionless and seamless would mean one of three things: Northern Ireland would hold a different position within the UK (its territory would be treated differently from that of Great Britain), the Republic would have a different position in the EU (its territory would be treated differently from the rest of the single market), or the EU would relax its rules regarding freedom of movement and the integrity of its legal order.

Barnier’s recent statement confirms that this third option is nowhere near the negotiating table; it would be seen as turning Brexit into an act of self-harm for the EU itself. The Irish Government has been equally consistent in its commitment to full EU membership.

Any bespoke arrangements for Northern Ireland would have to be a matter for parallel, careful negotiation with the parties to the Belfast Agreement, including both governments. The current suspension of the talks between Northern Irish parties does not bode well for the forward-thinking, creative and bold conversations needed for any reworking of the agreement needed to conjure up a unique Northern Ireland-centred arrangement. It is perhaps for such reasons that the language of the UK government has moved away from promises of a “frictionless” border towards one focusing on the possibility that it may be “invisible”.

Common UK and Irish membership of the EU single market did much to remove the visibility and friction associated with the Irish Border. Membership has removed customs tariffs, harmonised regulation and indirect taxation, and created a more level playing field for trade and competitiveness across the Border. The risks posed by Brexit to cross-Border relations on the island of Ireland thus not only have fraught symbolic resonance but also starkly concrete implications.

The movement of goods is a particularly complicated matter. The future designation of goods originating in Northern Ireland will affect the nature of the controls required on them in crossing the Irish Border. Such controls will be necessary to uphold the integrity of the customs regime on either side of this Border.

Technological solutions in this field are limited, and tend to rely on features that will be difficult to implement in the case of the Border. These would include effective IT systems for traders to make customs declarations and for customs enforcement to perform risk analysis on declared goods, on the predominance of single-load containers for tracking and on designated entry points along a land border for tracking/stopping the movement of goods.

There are difficulties in all these areas when applied to the context of the Border. Some arise from the nature of cross-Border trade on the island (such as groupage, Just in Time logistics, predominance of SMEs with small capacity and no experience of customs declarations, agri-food supply chains). Others arise from the nature of the Border itself, with well over 250 crossing points and a historical symbolism that would make any physical piece of monitoring equipment or customs checkpoint a security target.

It is clear that if there is to be “friction” in the movement of goods across the EU’s external border on the island of Ireland, maintaining a truly invisible Border would entail three major areas of risk. The first comes in the rationale for border management: how can compliant trade be facilitated and illegitimate trade be stopped with no physical infrastructure? The use of mobile taskforces for enforcing on-site or intelligence-led inspections cannot substitute entirely for dedicated, properly equipped inspection facilities. The second area is in the dangers posed to the economy and to citizens on both sides of the Border if there is a growth in black market activity across the Border – something that will become incredibly lucrative. The third risk is in the rising capacity for surveillance and electronic monitoring that may accompany the growth in a state’s desire to be able to track movement across a border in “hidden” ways. Such risks serve only to exacerbate the existing challenges in the Border region.

If a frictionless Border is impossible, and an invisible Border undesirable, all hope now lies on the capacity of players on both sides for flexibility and imagination.