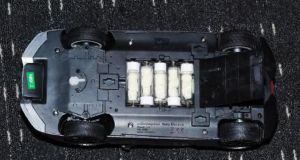 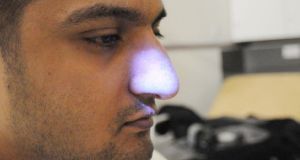 Mohammed Ali, under a UV light when he was arrested,is covered in invisible liquid from handling a car with what he believed was ricin. Photograph: Greater Manchester Police/PA Wire

A computer programmer is facing a lengthy jail sentence for trying to buy deadly ricin poison from the dark web after being inspired by hit US television series Breaking Bad.

Software programmer Mohammed Ali (31) held his head in his hands after being found guilty of attempting to possess a chemical weapon between January 10th and February 12th.

Ali was unaware that his source, Psychochem, was in fact an FBI agent who tipped off police in England and substituted the consignment of ricin for harmless powder.

After the father-of-two took delivery of a toy car with five vials hidden in the battery compartment, police swooped to arrest him at his home in Prescot Road, Liverpool.

Under ultraviolet light, Ali’s face lit up showing that he had handled the package which had been specially treated with a marker substance.

Computer analysis showed that Ali first began trawling the internet for information on poisons such as abrin, ricin and cyanide in October last year.

The court heard Ali approached the undercover agent in January with a private message: “Hi, would you be able to make me some ricin and send it to the UK?”

At one point Ali asked, “How do I test this ricin?” and received the instruction: “You must test it on a rodent.”

Records showed that on February 4th – days before the delivery – he made a payment of 2.1849 bitcoins, the online currency.

Around this time, Ali had made a to-do list on his computer which included the entries “paid ricin guy” and “get pet to murder”, the court heard.

He had also made a series of internet searches for chinchillas, animal rescue centres, rabbits and “pocket-sized pets”.

In his defence, Ali told jurors that he was just “curious” and wanted to test the boundaries of the dark web, unaware that ricin was illegal.

He told the jury: “I was interested in the dark net and ricin. I just wanted to know what the fuss was about. I wanted to know can you actually get anything from these sites. So I go on one of these websites: Evolution.

“I found lots of different items ranging from drugs, guns, other illegal items, and because I had been watching ‘Breaking Bad’ TV show, I just had ricin in my mind.”

He said that he abandoned his idea to test out the poison on a small animal and had resolved to flush it down the toilet instead.

His defence team suggested this excused his behaviour in law because Ali wanted ricin for a “peaceful purpose”; a psychologist also told jurors he exhibited signs of Asperger’s syndrome.

But prosecutor Sally Howes QC said Ali was a “chancer” who lied to police about having ricin when he was arrested in the hope that he would “get away with it”.

And everything about his conduct pointed to a man who meticulously researched and carried out a plan to buy ricin.

Before hatching his ricin plan, Ali had been involved in various illegal money-making scams which included stealing £250,000 from PayPal through a loophole in the system and switching defective computer hard drives for new ones to sell on eBay. He also told jurors how he used to “mine” for bitcoins, rather than buying them.

The Old Bailey jury took 5½ to convict Ali who then slumped in the dock and buried his head in his hands.

Adjourning sentencing to September 18th, Mr Justice Saunders said: “There is no evidence that he was planning any sort of terrorist attack. There is also no evidence that he had in mind any specific victims for ricin. I do not accept he was going to dispose of it.

“I’m satisfied it would have remained in his possession in some way and that is the basis on which I propose to sentence.”

The judge ordered a psychiatric report and asked for information about Ali’s dangerousness before the next hearing.

The maximum sentence for the offence is life imprisonment.