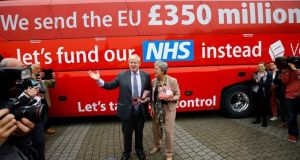 Boris Johnson has insisted he stands by his claim that the UK sends £350 million a week to the European Union that could otherwise be spent on the NHS. Photograph: Reuters.

Boris Johnson has insisted he stands by his controversial claim during the Brexit referendum that the UK sends £350 million a week to the European Union that could otherwise be spent on the National Health Service (NHS).

The claim - emblazoned on the side of Mr Johnson’s ‘battlebus’ during last year’s campaign - was denounced by the UK’s official statistician as “misleading” and has since been disowned by senior members of the Brexit campaign.

The foreign secretary’s comments came as a poll suggested that, for the first time since the June 23rd referendum, a majority of voters think the decision to opt to leave the EU was wrong.

Some 45 per cent of those questioned by YouGov for The Times said that in hindsight they believed Britain was wrong to vote for withdrawal - up two points on a month ago - compared with 43 per cent who thought the decision was right - down three points.

Challenged over whether he stood by the £350 million claim, Mr Johnson told ITV1’s Good Morning Britain: “Of course I do.” He insisted the figure was “not disputed”.

He described the sum as “£350 million a week which we do not currently control which could be spent on our priorities, including the NHS”.

During the referendum campaign, the chairman of the UK Statistics Authority, Sir Andrew Dilnot, took the unusual step of saying he was “disappointed” that the Leave campaign persisted with the £350 million figure after being warned it was “misleading”. He said the way the campaigners were deploying the figure risked undermining trust in official statistics.

The figure does not take account of the UK’s rebate, secured by Margaret Thatcher, or the cash returned to Britain by the EU.

Immediately after the Leave victory, then Ukip leader Nigel Farage admitted the figure was a “mistake” and said he would not have made the claim.

But Mr Johnson said: “As far as I remember, the gentleman in question belonged to another party and wasn’t on my bus.”