Arrests in Glasgow after referendum rallies 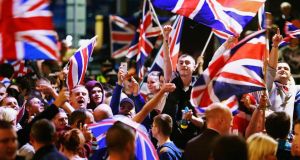 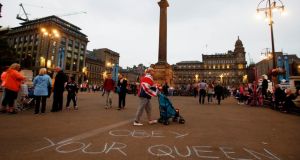 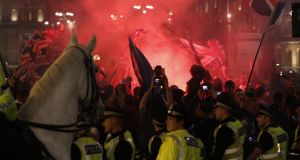 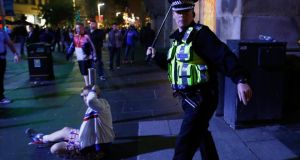 A policeman raises his baton during a demonstration at George Square in Glasgow, last night. Photograph: Cathal McNaughton/Reuters

Earlier in the evening, hundreds of people had crowded into the square, with union supporters and rivals sporting Yes badges arguing over the referendum result, while a chorus of Rule Britannia was countered by the Scottish anthem, Flower of Scotland.

BBC Scotland reporter Cameron Buttle said trouble broke out after Unionist supporters fired a flare and a “co-ordinated” charge at the pro-independence side.

“Chants of ‘Ten German Bombers’, ‘Rule Britannia’ and ‘God Save The Queen’ (the latter with what many would interpret as a Nazi-style salute) rang out to the utter bemusement of onlookers.”

Police officers, some mounted on horses, lined up to divide the groups.

A number of people draped in union flags left the area and began spreading on to the nearby streets, with many marching down St Vincent Place as police followed.

They later gathered in George Square again, this time at the top of the square next to Queen Street Station singing Rule Britannia and a flare was let off.

Police formed a human barrier to block off the route to Buchanan Street and contain people in the square.

Roads around the square, which had had hosted pro-independence parties in the days before the referendum, were closed as police dealt with the incident.

Elsewhere police said they were investigating a fire at an electrical substation in the city.

A Police Scotland spokesman said: “Officers are still investigating the cause.”

Jonathan Coates, assistant sports editor at the Herald newspaper, posted a picture of the blaze on Twitter.

It was understood to be at the rear of the Herald office, but Mr Coates warned people speculating on the cause of the fire not to assume it was started by vandals targeting the paper for coming out in favour of Scottish independence.

“Don’t jump to conclusions based on the picture I tweeted: no reason to suspect The Herald Group targeted by these vandals,” he tweeted.