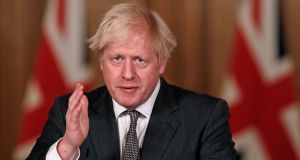 Almost the entire population of England will be under the most severe coronavirus restrictions from Thursday after Boris Johnson said a new variant of the virus was surging.

The new restrictions were announced hours after British regulators approved the AstraZeneca vaccine, which is cheaper and easier to distribute than the Pfizer vaccine that was the first to be rolled out.

Mr Johnson told a press conference in Downing Street that it was “very frustrating” to be in a position where the new strain of the virus was raging while the new vaccine brought such hope.

“We have to face the fact that we’ve got two big things happening at once in our fight against Covid – one’s working for us and one’s working against us.

“On the plus side we have got two valid vaccines, and we’re racing to get them out – and on the bad side there is a new strain of the virus which is spreading much faster and surging across the country.”

Unlike the Pfizer vaccine, the AstraZeneca product does not need to be kept at extremely low temperatures and thawed out before use.

Both approved vaccines require two doses a few weeks apart, but the British authorities have revised their vaccination plan to prioritise giving the first dose to as many people as possible and delaying the second dose until up to three months later.

“The great news is people get protection after the first dose. This means we can accelerate the speed at which we can vaccinate people for the first 12 weeks before we return to deliver the second doses for that longer-term protection,” health secretary Matt Hancock told the House of Commons.

Britain has ordered tens of millions of the new vaccine, but Mr Hancock admitted that just over half a million would be available from next Monday.

Britain reported a further 50,023 new coronavirus cases and 981 more deaths on Wednesday, more than twice the death figure for the previous day.

The government’s scientific advisers said the new variant of the virus was especially prevalent in London and the southeast of England, but was spreading throughout the country.

The new measures mean that 44 million people, almost 80 per cent of England’s population, will be under Tier 4 restrictions.

The government has also delayed the reopening of schools in some parts of the country, and told third-level colleges that students should not return until mid-January at the earliest.

“At this critical moment, with the prospect of freedom within reach, we’ve got to redouble our efforts to contain the virus. No one regrets these measures more bitterly than I do, but we must take firm action now,” Mr Johnson said.

“We must face the reality the sheer pace of the spread of this new variant requires us now to take even tougher action in some areas, and that does affect schools.”