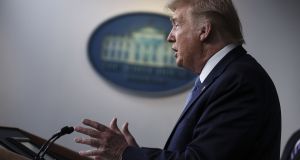 US president Donald Trump speaks during a news conference in the briefing room of the White House in Washington. Photographer: Oliver Contreras/ Sipa/ Bloomberg

The White House is proposing a roughly $850 billion emergency stimulus to address the economic cost of the new coronavirus in the US, sources said.

The request will be outlined to senate Republicans on Tuesday and will aim to provide relief for small businesses and the airline industry, and include a massive tax cut for wage-earners, according to insiders.

The White House hopes the measure will pass this week, as Donald Trump’s administration scrambles to contain the economic fallout of the severe disruptions to American life from the outbreak.

White House officials offered senators a preliminary briefing late on Monday at the Capitol, saying they want the plan approved by US congress as soon as possible — hopefully in a matter of days.

The rush to inject cash and resources into the economy is an effort unlike any seen since the 2008 economic crisis, with political and economic interventions and eye-popping sums used to try to protect Americans from the health and financial fallout.

At the same time, Democrats have proposed their own $750 billion aid package.

Meanwhile, Mr Trump escalated the war of words with Beijing by describing the outbreak as the “China virus”, something the WHO has advised against. Chinese state media called Trump’s comments an attempt to “pass the buck”.

San Francisco and five other counties in California issued a shelter-in-place order in an effort to curb the spread of coronavirus. From Tuesday night until April 7th, 6.7 million residents in San Francisco and five other Bay Area counties - Santa Clara, San Mateo, Alameda, Marin and Contra Costa – must stay home unless absolutely necessary. Elsewhere in the US, Ohio’s Democratic primary was postponed after the medical director intervened on health grounds.

Britons have been advised against non-essential travel to anywhere in the world as the coronavirus crisis closed borders around the globe.

Foreign secretary Dominic Raab said the fast-paced nature of the crisis meant that it was now necessary to issue global guidance.

The advice takes effect immediately and would last for an initial 30-day period.

“The speed and range of those measures across other countries is unprecedented.

“So I have taken the decision to advise British nationals against all non-essential international travel.”

The Foreign Office (FCO) said Britons who decide that they still need to travel abroad should be fully aware of the increased risks of doing so – including the possibility of being stranded overseas if restrictions are put in place.

The Foreign Office is not currently advising British people to immediately return to the UK if they are overseas, except from a few specific countries detailed in travel advice.

But British travellers are urged to bear in mind the prospect of flights being cancelled at short notice or additional restrictions being imposed by the local authorities.

EU leaders will hold their second summit in two weeks in a fresh attempt to forge a joint response to the coronavirus pandemic as Europe takes over from China as the frontline in the fight against the disease.

The virus case count in Europe has climbed to more than 50,000 and more than 2,000 people have died.

European nations are closing their borders to each other and to the rest of the world to try to curb the spread of coronavirus, reversing decades of efforts to ease movement within a matter of days.

French president Emmanuel Macron confined citizens to their homes for 15 days and banned even family gatherings, declaring the country was “in a war” with the virus after the country’s top health official said prior restrictions had failed to halt its spread.

The European Commission has proposed barring travel from the rest of the world to the EU for at least 30 days, with exemptions for citizens returning home, commuters and essential workers.

In the Philippines, the Philippine Stock Exchange (PSE) closed indefinitely on Tuesday while currency and bond trading were suspended, the first market shutdowns worldwide in response to the coronavirus. The PSE said the closure until further notice was “to ensure the safety of employees and traders,” amid a broader national lockdown.

Hong Kong requires all foreign travellers to go into two-week isolationHong Kong’s chief executive Carrie Lam announced the new quarantine measures because in the previous two weeks, the territory had recorded 57 new infections, 50 of them imported. The new restrictions would not apply to arrivals from mainland China, Macau or Taiwan.

Thailand reported 30 new coronavirus cases on Tuesday, raising the total to 177, with 70-80 per cent of them in Bangkok, according to the health ministry. Cambodia reported 12 new cases, bringing the total to 24. – Agencies