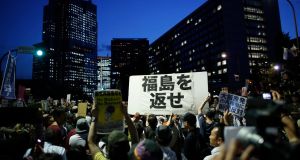 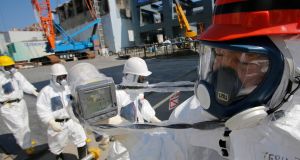 Thousands of people rallied in a Tokyo park today, calling for an end to atomic power and vowing never to give up the fight, despite two years of little change after the nuclear disaster in north-eastern Japan.

Gathering two days ahead of the second anniversary of the March 11th earthquake and tsunami that sent the Fukushima Dai-ichi plant into multiple meltdowns, demonstrators said they would never forget the world’s worst nuclear catastrophe since Chernobyl, and expressed alarm over the government’s eagerness to restart reactors.

“I can’t see what lies ahead. It looks hopeless, but if I give up now, it’s over,” said Akihiro Nakata, a 47-year-old owner of a construction company, who had a drum slung around his shoulder. “I’d rather die moving forward.”

Only two of Japan’s 50 working nuclear reactors have been put back online since the disaster, partly because of continuous protests like today’s, the first time such demonstrations have popped up in this nation since the 1960s movement against the Vietnam War.

People have thronged Tokyo parks on national holidays, and have gathered outside the parliament building every Friday evening. The demonstrations have drawn people previously unseen at political rallies, such as commuter “salarymen” and housewives. Organisers said today’s demonstration drew 13,000 people.

Two years after the disaster, 160,000 people have left their homes around the plant, entire sections of nearby communities are still ghost towns, and fears grow about cancer and other sicknesses the spewing radiation might bring.

But the new prime minister elected late last year, Shinzo Abe, hailing from a conservative party that fostered the pro-nuclear policies of modernising Japan, wants to restart the reactors, and maybe even build new ones.

The protesters said they were shocked by how the government was ignoring them.

“I am going to fight against those who act as though Hiroshima, Nagasaki and Fukushima never happened,” Nobel Prize-winning writer Kenzaburo Oe told the crowd, referring to the atomic bombings preceding the end of the Second World War. “I am going to fight to prevent any more reactors from being restarted.”

The demonstrators applauded, waving signs and lanterns that read “Let’s save the children” and “No nukes”. Some were handing out leaflets, pleading to save animals abandoned in the no-go zone.

Kazuko Nihei, 36, was selling trinkets and soap that mothers, like her, who had fled Fukushima had made, hoping to raise funds for children’s health check-ups and their new lives in Tokyo.

Another big Tokyo rally was planned for tomorrow. A concert tonight was to feature Oscar and Grammy-winning musician Ryuichi Sakamoto, one of the most vocal opponents of nuclear power. Commemorative services will be held on Monday throughout the nation to remember the nearly 19,000 people who died in the disaster.

Less under the spotlight on Monday will be a class-action lawsuit being filed against the government and Tokyo Electric Power Co, the utility that operates Fukushima Dai-ichi, demanding all land, the natural environment and homes be restored to their state before March 11th, 2011.

The case in Fukushima District Court is unusual in drawing people from all walks of life, including farmers, fishermen and housewives, because of the wording of the damage demand.

It has drawn 800 plaintiffs so far, a remarkable number in a conformist culture that frowns upon any challenge to the status quo, especially lawsuits. That number may grow as people join the lawsuit in coming months. A verdict is not expected for more than a year.

“We can’t believe the government is thinking about restarting the reactors after the horrendous damage and human pain the accident has caused,” Izutaro Managi, one of the lawyers, said. “It is tantamount to victimising the victims one more time.”

Kazuko Ishige, a 66-year-old apartment manager who was at the rally with a friend from Fukushima, said she was sick of the government’s lies about the safety of nuclear plants.