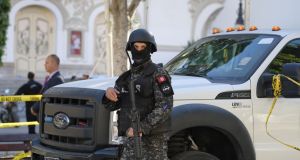 A member of the Tunisian security forces at the site of a suicide attack in the Tunisian capital Tunis. Photograph: Fethi Belaid/AFP/Getty Images

A 30-year old woman blew herself up in the centre of the Tunisian capital Tunis on Monday, wounding nine people including eight police in what the interior ministry called a “terrorist explosion”.

Witnesses described a blast on the central Habib Bourguiba avenue where hundreds of police later cordoned off an area near the capital’s landmark Municipal Theatre and the French embassy.

“I was in front of the theatre and heard a huge explosion,” said witness Mohamed Ekbal bin Rajib.

Ambulances could be heard rushing to the scene.

Shops were shut on the avenue, usually one of the busiest streets in the capital and site of protests that toppled long-serving leader Zine El-Abidine Ben Ali at the start of the 2011 “Arab Spring” of regional revolts.

Tunisia, which is heavily dependent on tourism, has improved security since a series of militant attacks targeting tourists caused the near collapse of the sector three years ago.

In 2015, 21 people were killed during a hostage siege in its national museum, the Bardo in Tunis, and a gunman killed 38 people on a resort beach. The following year, militants tried to capture the town of Ben Guerdane near the Libyan border.

There have been no attacks on that scale since then, but the economy has remained unsettled. And the authorities worry about militants who shelter in neighbouring Libya.

Tunisia is one of the few Arab democracies and the only country to throw off a long-serving autocrat during the Arab Spring without triggering large scale unrest or civil war.

It has since been credited with carrying out a democratic transition, holding free elections and guaranteeing fundamental rights in a new constitution. But turmoil and militant attacks have scared off tourists and investors, worsening an economic crisis caused by a chronic deficit.

Some 3,000 Tunisians have joined Islamic State and other jihadist groups in Iraq, Syria and neighbouring Libya while dissent over unemployment has risen in recent years in southern and central areas.