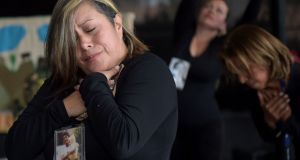 A record number of human rights defenders were murdered during 2018 in a year that saw global progress set back by a rise in populist right-wing politics, a leading charity has said.

At the launch of its annual report on Tuesday, the Irish-based Front Line Defenders (FLD) said that as well the deaths of 321 people in 27 countries, there was a notable move to frustrate human rights work on the part of governments.

Significant progress had been made in that time, the report said. Yet many of those gains “are increasingly under attack as the trend towards populist politics predicated on exclusionary nationalism and neo-liberal or protectionist policies continue to take hold” .

It said elections in countries throughout the year had often delivered platforms for those embracing xenophobic, racist and misogynistic views and related “visions for the future of their countries”.

Speaking at the launch, the charity’s head of protection Ed O’Donovan told The Irish Times there was a need for the Irish Government and its EU partners to closely monitor activities in Brazil following the election of right-wing president Jair Bolsonaro.

“During the course of his campaign last year he was using incredibly inflammatory rhetoric targeting marginalised communities and basically saying there would be an end to activism in Brazil,” he said.

Mr Bolsonaro has threatened to cancel regulations protecting the Amazon rainforest and its indigenous inhabitants. He also said he would close a government agency charged with protecting indigenous land.

“We are anticipating if he is going to hold true to his campaigning, a big roll-back in human rights in Brazil more generally,” Mr O’Donovan said, adding such political shifts threatened progress in climate change reduction.

Diplomatic pressure applied by European countries including Ireland could “urge Brazil to live up to its responsibilities” in terms of international treaties, he said.

The FLD report found that states continue to be the single greatest opponents of human rights workers with the act of criminalisation the biggest violation.

It cited various state moves during 2018 that undermined global efforts. In June the US withdrew from the UN Human Rights Council while Russia signalled its intention to withdraw from the Council of Europe.

Last September, Guatemala denied re-entry to the UN-mandated commissioner Iván Velásquez. In the Philippines, the UN special rapporteur on the rights of indigenous peoples, Victoria Tauli Corpuz, was placed on a terrorist list.

Egypt, meanwhile, ordered any social media account holders with more than 5,000 followers to be subject to government regulation and supervision.

Migrant rights was a key focus in Europe and the report noted opposition stances taken by Italy, the Czech Republic, Slovakia and Romania.

Meanwhile, the “global epidemic of murders” of human rights defenders continued, according to the report, which said 321 deaths was an increase of nine people on the previous year.

Colombia and Mexico accounted for just over half of these, while the large majority of victims were involved in work relating to indigenous and environmental issues.

Although most deaths took place in the Americas, FLD said incidents in Africa and Asia are “seriously under-documented”.

The charity has urged the release of nine high-profile defenders in eight countries who have been sentenced to a total of 138 years in prison, as well as three separate life sentences, for work in various campaigns.

Among them was Abdulhadi Al-Khawaja, sentenced to life imprisonment in Bahrain for campaigning for democracy, and Dawit Isaak in Eritrea, kept in a secret prison for 16 years after publishing open letters calling for reform.