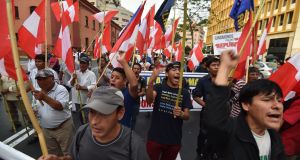 Thousands march against corruption through the streets of downtown Lima on February 16th. An Interpol arrest warrant has been issued for ex-president Alejandro Toledo, who now lives in the US, after Brazilian construction giant Odebrecht said he sought and received a $20 million bribe. Photograph: Cris Bouroncle /AFP/Getty Images

A Brazilian executive has told the country’s electoral court that his company gave the winners of the 2014 presidential election the equivalent of tens of millions of euro in illicit financing, further complicating the position of President Michel Temer.

Marcelo Odebrecht told the court on Wednesday that 80 per cent of the 150 million reais (€45 million) his Odebrecht construction conglomerate supplied to the winning ticket of Dilma Rousseff and then vice-president Temer was undeclared with most of it delivered in cash, according to leaks of his testimony carried in Brazilian media.

Ms Rousseff secured re-election but was impeached last year in a process backed by her erstwhile allies in Mr Temer’s Democratic Movement of Brazil Party, allowing him to replace her.

Mr Odebrecht said Ms Rousseff was aware of the illicit financing, a claim she vehemently denies. But he contradicted one of his executives by saying Mr Temer did not directly ask him for cash ahead of the 2014 dispute, though they did discuss financing.

If the electoral court believes the Dilma-Temer ticket broke campaign financing laws it could cancel Mr Temer’s presidential mandate. His supporters have argued that if he can clear his own name then Mr Temer should be allowed to remain on as president regardless of an adverse ruling for Ms Rousseff.

Arrested in 2015, Mr Odebrecht, a billionaire whose family grew rich from securing state contracts, was convicted of corruption last year and sentenced to 19 years in prison, leading to his decision to co-operate with prosecutors in return for reduced jail time.

After three years during which it has shaken Brazil’s political system to its core, the corruption scandal that started with revelations about wrongdoing in Brazilian state oil giant Petrobras is now spilling into neighbouring countries.

The current president of Peru along with his three predecessors are facing questions following Odebrecht’s admission as part of its plea-bargain deal in Brazil that it paid tens of millions of euro in bribes to the country’s politicians in order to secure public contracts.

An Interpol arrest warrant has been issued for former president Alejandro Toledo, who now lives in the United States, after Odebrecht said he sought and received a $20 million bribe.

The revelation has helped torpedo the popularity of new president Pedro Pablo Kuczynski, who previously served as Toledo’s prime minister. Prosecutors are also examining Odebrecht evidence that implicate the administrations of two other former presidents Alan García and Ollanta Humala.

In Argentina, Odebrecht says it paid tens of millions of dollars in bribes to win public contracts during the presidency of Cristina Kirchner. Testimony from its executives also claimed that a company owned by a cousin of current Argentine president Mauricio Macri was another participant in the bribery scheme, according to leaks in Brazil.

Meanwhile Mr Macri’s chief spy and close friend Gustavo Arribas is being investigated over suspicions he received a $600,000 bribe from Odebrecht. He denies any wrongdoing.

The Odebrecht affair has also dragged in the founders of Mossack Fonseca, the law firm at the centre of the Panama Papers scandal.

Ramón Fonseca and Jurgen Mossack were arrested last month after being indicted on money-laundering charges linked to the Brazilian scandal. Mr Fonseca has since accused Panamanian president Juan Carlos Varela of taking “donations” from Odebrecht.

There are also formal or preliminary investigations into politicians accused of receiving illicit payments from Odebrecht in Portugal, Ecuador, Mexico, Guatemala and the Dominican Republic. Odebrecht has also admitted paying bribes in Venezuela, Angola and Mozambique among other countries.