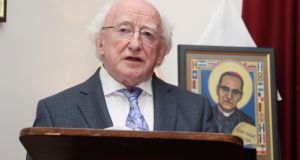 President Michael D Higgins praised the Catholic bishops’ agency Trócaire for its human rights work in El Salvador and its fight for social justice there alongside Archbishop Oscar Romero. The archbishop was shot dead on March 24th 1980 while celebrating Mass in a hospital in San Salvador, capital of El Salvador, because of his outspoken defence of the poor.

He was beatified in San Salvador on Saturday.

Archbisop Romero had worked closely with Trócaire, whose chairman then was Bishop Eamon Casey, of whom President Higgins said “there were things on which we agreed and on which we didn’t agree”.

At a reception afterwards, the President said: “Let us thank God for Blessed Oscar Romero.”

Trócaire, which had worked alongside Blessed Oscar Romero was “just a wonderful organisation,” he said, paying tribute particularly to the work in El Salvador and Central America generally of Sally O’Neill who recently retired “after a lifetime dedicated to the poor”.

He recalled that Archbishop Romero was known in El Salvador as “the bishop walks with the people”. He said “the work of Archbishop Romero in advocating for people, the less powerful, the vulnerable and the oppressed is not something that is confined to his time and place, but is also relevant here, today, and is a task for each of us in our varoius roles and positions in life”.

El Salvador and its people “have held a special place in my heart and in my political conscoiousness for over 40 years,” he said, and recalled his many visits there including as President of Ireland in 2013.