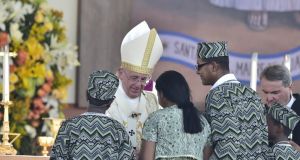 Latin America’s first pope has stressed the need to protect the poor and the environment from exploitation and to foster dialogue among all sectors of society on his return to Spanish-speaking South America for the first time.

In a speech in front of President Rafael Correa, the Argentinian pontiff signalled some of the key themes for the visit, which will also take him to Bolivia and Paraguay: the need to care for society’s most marginal; guarantee socially responsible economic development; and defend the Earth against profit-at-all-cost development that he says harms the poor the most.

“May you never lose the ability to protect what is small and simple, to care for your children and your elderly who are the memory of your people, to have confidence in the young and to be constantly struck by the nobility of your people and the singular beauty of your country.”

It is a message that is particularly relevant for Ecuador, a Pacific nation of 15 million people that is home to one of the world’s most species-diverse ecosystems and the Galapagos Islands, which inspired Charles Darwin’s theory of evolution.

While oil has brought Ecuador unparalleled revenues in recent years, the accompanying deforestation and pollution have stained its vast swathes of Amazonian rainforests, where many indigenous people live.

Standing by Mr Correa’s side at the airport, Francis pledged that the Catholic Church was ready to help meet the challenges of the day by encouraging a respect for peoples’ differences.

Mr Correa, for his part, echoed many of the pontiff’s own themes about the “perverse” global economic system that keeps the poor on the margins while the rich get richer, exploiting the planet’s natural resources in the process.