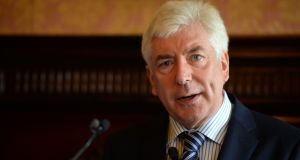 Solar farms might become part of the landscape in the southern half of the country in the next decades as part of a policy to cut down reliance on fossil fuels.

Once associated with warmer countries closer to the hemisphere, solar power farms have been approved in more than 300 locations in Britain in recent years, mainly in Cornwall and Devon, following improvements in the technology.

On the eve of the publication of the Government’s White Paper on energy, which will set out the energy policy roadmap for the next decade, it is understood solar farms will form part of the complex range of renewable energy solutions designed to replace the State’s high dependence on fossil fuels.

Most of the farms are expected to be located in the southern half of the country. None is expected to be larger than 10 hectares but if a sufficient number are approved solar can provide a complementary sources to wind energy.

During his visit to the COP21 summit in Paris last week, Minister for Communications, Energy and Natural Resources Alex White said the White Paper, to be published tomorrow, would set out how Ireland would achieve a low- carbon energy system.

“We are poised to do great things. Decarbonising our energy system is essential if we are to deliver on the global climate change ambitions being discussed in Paris this week. Ireland must and will play its full part in this.

“We are well placed to achieve our 2020 target of producing 40 per cent of our electricity from renewables. This should give us the confidence to be ambitious about further reducing energy-related carbon emissions after 2020.”

Mr White has said he would outline new policy actions to encourage improved energy efficiency in homes, businesses and the public sector. He said: “Ireland is currently almost halfway to meeting its 2020 target of a 20 per cent improvement in energy efficiency. But we will have to increase our performance significantly it we are to achieve success by 2020.”

Separately, the Government is now expected to delay until the new year a key decision to increase its funding for climate change in poor and developing countries.

Since the global summit in Copenhagen in 2009, developed countries including Ireland have agreed to pledge $100 billion in collective funding each year to the Green Climate Fund. After being criticised for not contributing anything to the fund until 2015, the Government announced in the budget last October it would contribute €2 million for 2016.

It was expected the Taoiseach would announce the funding for 2017 and beyond when he addressed the COP 21 global climate change summit in Paris. However, no announcement was made after Mr Kelly and Minister for Finance Michael Noonan could not agree on a sum. The €2 million commitment for 2016 was to be formally approved at Cabinet today but sources said it might not arise because of a packed agenda.