Paris metro subway strike to start ahead of Euro 2016 tournament 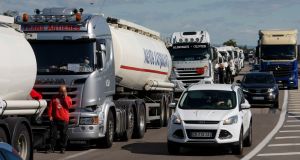 Tanker trucks line up near a barricade set up by union members on strike preventing the access to a refinery in Fos sur Mer, southern France. Union-led blockades of French depots and oil refineries have led to fuel shortages and police action. Photograph: AP Photo

The leading labour union at the Paris subway company on Monday announced an open-ended strike that would start a week before the Euro 2016 soccer tournament opens in France.

The call for stoppages from June 2nd onwards was made by the CGT labour union, which is already spearheading weekly rail strikes and other protests over labour law reforms that would make hiring and firing easier.

President Francois Hollande, heading towards elections a year from now, has refused to withdraw the labour reform, which the CGT and several smaller unions want scrapped on the grounds that it would undermine high standards of labour protection.

Millions of fans and foreigners are expected to attend the Euro 2016, a soccer fiesta involving 24 national teams that runs from June 10th to July 10th.

The CGT said that the strike on Paris’s metro subway network was being called over pay demands as well as the labour reform, which has sparked waves of street protests since it was hatched more than two months ago.

Metro strikes in Paris usually cause some disruption without paralysing the whole network.

Blockade Meanwhile, France’s hardline CGT and FO unions launched a 24-hour strike at the Fos-Lavera oil terminals and blockaded a fuel depot in the southern port city of Marseille on Monday as they toughened their stance against labour market reforms.

The rolling strikes, which began in March and have gathered pace in recent weeks, have disrupted fuel supplies in France since Friday with protesting workers blockading petrol depots and halting production at refineries.

French oil and gas company Total, which operates five of the eight refineries in France, has started the process of shutting down three - at Normandy, Donges and Feyzin – while its Grandpuits refinery was running at minimum output. Rival Exxon Mobil said the strike has not affected output at its two refineries but striking workers had blockaded the oil terminal at Fos-sur-Mer in Southern France.