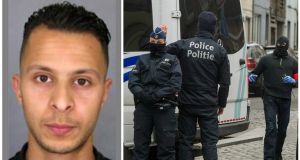 Police in Belgium said that Salah Abdeslam (left), the main fugitive from Islamic extremist attacks in Paris in November, has been arrested in Belgium’s capital after four months at large. 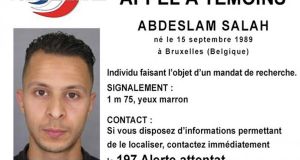 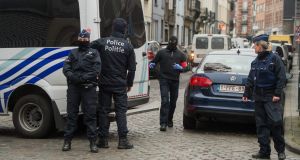 Belgian security forces seal off an area during an anti-terror operation in the Molenbeek neighborhood of Brussels. Photograph: Stephanie Lecocq/EPA 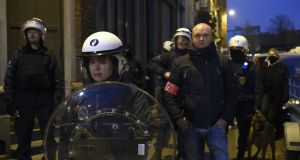 Belgian police forces stand guard in a street during a police action in the Molenbeek-Saint-Jean district in Brussels. Photograph: John Thys/AFP/Getty Images

Salah Abdeslam, the main fugitive from Islamic extremist attacks in Paris in November, has been arrested in Belgium’s capital after four months at large, according to police.

Officers said he was arrested in a major police operation in the Brussels neighbourhood of Molenbeek.

Belgian secretary of state for asylum and migration Theo Francken confirmed the arrest, saying on Twitter: “We got him”.

Two explosions have been heard in Molenbeek where police have captured a third suspect who was holed up in a house.

Five people were detained in total in the Brussels raids, including three who sheltered Abdeslam, the Belgian prosecutor said.

At a joint press conference with Belgian prime minister Charles Michel, French president Francois Hollande said: “I have a special thought for the victims of the attacks on November 13th in Paris, because SA is directly connected to the preparation, organisation and . . . the perpetration of these attacks.

“I also think of the families who have been looking forward to these arrests, whether from close range or long distance, who are connected to that abomination.”

Mr Michel said the operation was a success in the “fight against terrorism”.

State broadcaster RTBF said the evidence showed it was “more than likely” that Abdeslam was one of two people who escaped during this week’s raid in which one Islamist gunman was shot dead by a police sniper.

Also on Friday an Algerian killed in a shootout with Brussels police this week was identified as a man sought under an assumed name for plotting November’s Islamist attacks in Paris, Belgian public broadcaster RTBF said.

The gunman killed on Tuesday and named by police as Mohamed Belkaid used the name Samir Bouzid, RTBF said.

“Bouzid” has been on French and Belgian wanted lists since December, when evidence emerged of him making a cash transfer from Brussels to a woman killed with other suspects in Paris five days after the attacks.

RTBF described Belkaid as an accomplice of fugitive suspect Abdeslam, whose fingerprints and DNA were found at the apartment where Belkaid was killed.

The broadcaster quoted an unidentified source as saying it was “more than likely” Abdeslam had fled the scene of Tuesday’s police raid.

Investigators have declined comment beyond saying that Abdeslam’s fingerprints were found in the apartment.