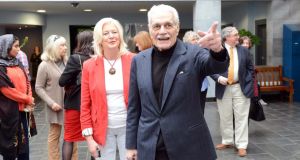 Omar Sharif visiting the Chester Beatty Library for a screening of ‘Lawrence of Arabia’, as part of the Dublin Arabic Film Festival in 2014. File photograph: Eric Luke/The Irish Times

‘Lawrence of Arabia’ star Omar Sharif has Alzheimer’s disease, his agent has said.

Steve Kenis gave no further details about the 83-year-old or his care. His son, Tarek Sharif, revealed the diagnosis in an interview with Spanish newspaper ‘El Mundo’.

The Egyptian-born Sharif rose to international stardom with his role in the 1962 epic ‘Lawrence of Arabia’ – his first English-language film. He earned an Oscar nomination for his turn as Sherif Ali in David Lean’s film opposite Peter O’Toole.

His last completed feature film credits were in 2013.