‘Now we are not in a state of fear’: Life slowly returns to normal in China

As coronavirus cases decrease, people begin emerging from isolation onto the streets

A New York Times investigation looks at how China’s expansive propaganda system aimed at foreigners is looking to reshape the coronavirus narrative around the world. Video: The New York Times 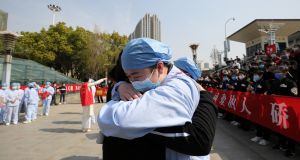 A local medical worker embraces and bids farewell to a medical worker from Jiangsu at the Wuhan Railway Station as the medical team from Jiangsu leaves Wuhan, the epicentre of the coronavirus disease outbreak, in Hubei province. Photograph: Reuters/China Daily

At 44KW, a nightclub in Shanghai, life almost feels normal again. Bartenders mix cocktails for patrons leaning against the bar. Groups sit close together without face masks on, talking and sipping their drinks. A young woman pulls down her mask and speaks into her phone as she livestreams to her followers. A DJ plays disco under a neon sign saying “Dance me to the end of love” while a few venture out to the dance floor.

“Right now we need music,” said Kaijie Huang (27) who manages the club, which opened its doors last Thursday after more than a month of staying shuttered as Shanghai joined cities across China in various levels of lockdown to contain the coronavirus outbreak. “A lot of people seem very lonely because they all had to stay at home,” she said.

For many in China, life is slowly returning to normal, giving other countries a glimpse of what might await them once the worst of the epidemic has passed.

Elsewhere in Shanghai, women walk arm in arm past a reopened shopping district. Narrow pavements are crowded as residents browse food shops. At one entrance to a hospital, a man wore his hazmat suit partly unzipped as he waved in cars.

In Beijing, traffic has begun to return and more residents can be seen out on the streets, in parks and in shopping and restaurant districts. Jia Shu’na (20) travelled to Beijing on Wednesday, a stop along her route back home to Inner Mongolia to resume classes.

“Now I feel like things are gradually recovering. Now a lot of transportation has opened up,” she said, sitting in a park with her luggage. Jia said she noticed long lines at the train station when she departed from the southern province of Yunnan, and several people in each train car. “Many people have gone out. It’s much better than before,” she said.

More than 80,000 people have been infected by the virus that first appeared in the city of Wuhan, killing more than 3,000, but the number of new infections per day has dropped dramatically.

For several days in a row, China has reported no new locally transmitted infections. Authorities are loosening restrictions and trying to crank back up the stalled economy, urging factories and businesses to resume operation.

On Wednesday, Chinese leader Xi Jinping ordered officials at all levels of the government and Communist party to move with “urgency” in restoring economic and social order. In low-risk areas, production and normal life “must be fully restored,” he said, according to state broadcaster CCTV.

On Thursday, Wuhan reported no new infections for the first time. Local authorities in the surrounding Hubei province, outside of Wuhan, loosened travel restrictions, allowing residents deemed healthy to begin moving around. Companies are able to arrange for their workers to come back to Wuhan and most car checkpoints have been removed.

Hospitals have resumed normal operations, opening to patients with conditions that are not virus-related. On Friday morning, the city of Honghu, south of Wuhan, officially ended its lockdown.

For those in Wuhan, however, life has not yet returned to normal. Residents are still barred from going outside of their residential compounds. The streets remain mostly empty. Food supplies are still difficult to source and the prices are three to four times higher than normal, according to Iris Yao (40) who has been at home with her parents for most of the last two months. She is still rationing their supplies, making one cabbage last a week and pooling with others in order to buy groceries at cheaper bulk prices.

While Yao says the situation has improved dramatically, she disagrees with the characterisation from Chinese officials and state media that the government’s methods were a success.

“In terms of controlling the epidemic and requiring everyone to stay at home, that worked,” she said. “But the beginning was a failure. The virus was able to spread because of what was not done. The sacrifices Wuhanese people have had to make are huge.”

The outbreak prompted a level of public anger and criticism directed at the ruling party not seen in decades. But as the epidemic lessens within China and the crisis worsens in other countries, relief has begun to displace outrage and anxiety.

“At the beginning, I wanted to yell at the local government. Everyone was getting sick and unable to get help,” Yao said. That anger turned to a sense of dissent, Yao said, after the death of a doctor who tried to warn colleagues about the virus.

“Now I feel like my emotions are going back to normal some. There is a little more light,” she said. “Now we are not in a state of fear.”

Some experts doubt the numbers officials have been reporting, noting inconsistencies in reports of what areas are now deemed “low risk”. Others worry cases could spread again once normal life has resumed.

“It is likely that cases will rise once China eases its control measures. This means they will have to maintain vigilance for a surge of new cases and decide how to respond,” said Jennifer Nuzzo, an epidemiologist at Johns Hopkins University in the US.

There are many ways that life has not returned to normal. Economists say the Chinese economy will take a large hit, which could pose an even larger threat to social stability in the wake of the outbreak. Analysts believe the economy is on track to experience its first quarterly contraction since 1989.

Day-to-day life for people across China will remain slightly stilted for some time. Office buildings, shopping malls and other public places still require people to be registered and their temperatures recorded. Several areas require people to show a “green” reading though a smartphone app called Health Code, through WeChat or Alipay.

At Tianzifang, a recently re-opened shopping district and tourist site in Shanghai’s French Concession, the measures have created a bottleneck. A small crowd is gathered at the entrance where two guards try to guide confused patrons in the Health Code app, as well as an additional ticket to enter.

For others, the added measures are perfunctory. At the gate to one neighbourhood of Shanghai’s iconic lane houses, a guard sat next to a folding table with a clipboard to register those coming in and out. Residents quickly stuck their arms out for their temperature to be taken. One walked away before his reading came up while others noted with surprise changes in their temperature.

“The last place said I was 33 degrees. How can I now be 36?” one asked, complaining about inaccurate thermometers being used in the city.

While China has reported no new locally transmitted cases, the country has still seen daily increases in those coming from abroad, prompting worries of a rebound. Imported cases was reported at 269 on Saturday morning, as infected travellers were confirmed not only at major hubs like Beijing and Shanghai but in provinces including Liaoning, Gansu, Heilongjiang in the north and Zhejiang, Fujian, and Sichuan in the south and west.

“The number of imported cases in China has further increased. So the pressure to be on guard has also increased,” said Wang Bin, an official of the National Health Commission at a news conference on Friday.

Xi has ordered officials to be vigilant at the borders, and international flights to Beijing have been diverted to other cities. Wariness over foreigners has increased. As one US citizen struggled to check into a hotel in Shanghai, a woman waiting in line murmured: “Before, everyone was afraid of Chinese people. Now it’s the reverse.”

At 44KW, patrons must show their Health Code reading and foreigners have to bring their passports to show they have not been in virus-stricken areas recently. For now, the club cannot host DJs coming from overseas. Yuan Qingai, (26) a singer, is livestreaming from the club and speaking to more than 100 fans online.

She tells them that she is speaking to foreign media about the epidemic. They quickly advise: “You should wear a mask.”– Guardian