Moscow seeks to extend influence in US back yard 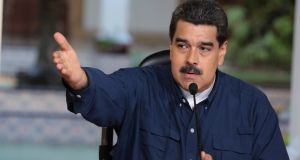 As the US gradually tightens financial restrictions on Venezuela’s increasingly authoritarian government, Russia is eyeing an opportunity to extend its influence in Latin America and establish a geopolitical foothold in Washington’s back yard.

“We have been expecting this for a while, and now it’s here,” said a Russian expert who advises the Kremlin on Latin America after the US banned trading in new Venezuelan sovereign debt and that of its state oil companyon August 25th. “It means Russia’s weight increases. Who else have they left but us?”

Nicolás Maduro, Venezuela’s president, said last week he expected to travel to Russia soon. Neither the Kremlin nor the Russian foreign ministry would confirm an imminent visit, but Mr Maduro’s intended trip shows how his regime now sees Moscow as Venezuela’s lender of last resort.

While other creditors have pulled back as Venezuela’s financial and political crisis worsens, Moscow has apparently piled in to secure oil assets with long-term value. State-owned oil company Rosneft extended $1 billion (€840 million) in additional credit to Petróleos de Venezuela (PDVSA) earlier this year in the form of prepayments for oil supplies, bringing total lending to its Venezuelan counterpart to $6.5 billion.

“Maduro has long been talking about visiting Moscow, but now he really needs to: he needs more financial support, and Russia is about the only place remaining where he can get it,” says Viktor Semyonov, a researcher at the Institute of Latin American Studies at the Russian Academy of Sciences.

Another Russian Latin America expert who is advising the government said Venezuela was expected in coming weeks to ask for a moratorium in servicing debt owed to Russia, and for fresh credit on top of that. “And they will probably get it, as well as humanitarian support such as more shipments of wheat and medicines,” he added.

Caracas desperately needs cash. In the remaining four months of this year, $4.2 billion in payments for sovereign debt and bonds of PDVSA will come due. The state-owned oil company has to repay $1.28 billion in October and $1.71 billion in November alone, according to Caracas Capital Markets. The country has less than $10 billion in foreign reserves.

How much fresh credit Venezuela may receive from Russia is an open question. Politically, Russia’s engagement, especially Rosneft’s role, also looks like a big gamble. Even China, which had been one of Venezuela’s most generous creditors, is no longer offering Caracas fresh money.

Moscow has a record of siding with authoritarian regimes, even if they appear doomed in the short term. In many cases, Rosneft has been part of its playbook.

“To be sure, they look for profit, and this is a fundamental difference from Soviet-era economic ventures, which were very rarely about making money abroad, but they also execute politically important tasks on behalf of the majority owner,” says Dmitri Trenin, director of the Carnegie Moscow Centre. “In doing the latter, they can engage in operations that would be considered too risky from a commercial point of view. Particularly in the energy business, commerce and geopolitics are very much intertwined.”

The commercial attraction for Rosneft is the chance to get its hands on oil supplies and assets at below market prices. Already, the Russian company receives 225,000 barrels of crude a day from PDVSA, about 13 per cent of Venezuela’s total oil exports. It has been mooted that Rosneft could swap its collateral on 49 per cent in Venezuela’s US-based refinery Citgo, secured on a $1.5 billion Rosneft loan made to Venezuela last year, for stakes in oil ventures instead, according to press reports.

Rosneft did not respond to repeated requests for comment.

Venezuela has also been a key foothold for Russia’s defence industry, one of its few strong exporters beyond the resources sector. One of the first bilateral agreements Moscow and Caracas signed after Hugo Chávez visited Moscow in 2001 was a deal on military-technical co-operation.

Russia is building a Kalashnikov plant in Venezuela which is expected to export all over Latin America, and Moscow says it has also set up a helicopter maintenance base there.

Observers in Moscow believe that even if Mr Maduro were toppled, Russia would be in pole position to benefit from an eventual new start. Mr Semyonov views Henrique Capriles, who lost to Mr Maduro only narrowly when he last ran for president in 2013, as a likely successor and argues he would pursue a pragmatic course. “He would understand that Rosneft did a lot for the country and is an efficient operator which can help grow oil production quickly,” he says.