Voice of Israel’s right shifts to the middle ground 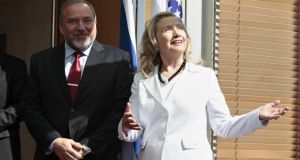 IAvigdor Lieberman with then US secretary of state Hillary Clinton in 2012. Israel’s foreign ministewr has become an enthusiastic supporter of the current Israeli-Palestinian peace talks. Photograph: Ammar Awad/Reuters

Israel’s foreign minister Avigdor Lieberman has undergone a dramatic political transformation in recent months: until recently a diplomatic persona non grata due to his extremist right- wing positions, he has morphed into an enthusiastic supporter of peace talks, winning praise from Washington.

Washington was quick to welcome Lieberman’s comments. State department spokeswoman Jan Psaki said the sentiment reflected the belief of many Israelis that a two-state solution was the right outcome at the end of the peace process.

“It certainly is a powerful statement and a powerful message given his history and his background on these issues and where his view was.”

Lieberman’s shift to the centre emerged after his appointment by prime minister Binyamin Netanyahu for a second term as foreign minister last November, after he was acquitted in a corruption case.

Responsible adult
Since then, he has acted as the responsible adult in the coalition, in sharp contrast to other ministers, who have made outspoken and sometimes bitter attacks on Kerry.

During his first stint as foreign minister, Lieberman was shunned by many top Western diplomats due to his controversial anti-Arab comments, including terming Palestinian president Mahmoud Abbas a “diplomatic terrorist” and an obstacle to peace.

He declared there was no chance of achieving peace with the Palestinians in the foreseeable future and excluded himself from peace contacts, using the excuse that as a resident of a West Bank settlement he had a conflict of interest.

Always a maverick, but with sharp political antennae, it could well be that Lieberman’s dramatic U-turn is part of his long-term strategy to become Israel’s next prime minister.

The influence of his traditional power base, immigrants from the former Soviet Union, is waning as they no longer feel obliged to vote for one of their kind (Mr Lieberman emigrated from Moldova in 1978).

The ruling Likud Beiteinu (an alliance of Netanyahu’s Likud and Lieberman’s Yisrael Beiteinu) is dominated by hardcore rightists.To be considered a serious contender for prime minister, Lieberman will have to win over the middle ground, who remain in favour of peace and the accompanying territorial concessions this will entail.

him of now being “to the left of Tzipi Livni”, Israel’s justice minister, who heads the talks with the Palestinians. However, he denied that he had significantly shifted his position.

“You should deal with facts, not imagery or preconceptions,” he said. “I don’t think I’m being moderate or accommodating. I’m being realistic and pragmatic, as I am on every issue.”

Some of his positions remain controversial. While supporting the idea of a land swap as part of a peace deal, in order to bring the large West Bank settlement blocs under Israeli sovereignty, he argues that territory to be transferred from Israel to a future Palestinian state should include large swathes of the Arab Galilee, to increase Israel’s Jewish majority.