Europe via Turkey route is extremely dangerous – and shockingly lucrative 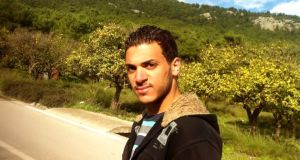 19-year-old Hosam from Damascus has joined the thousands of migrants attempting to reach Europe. In order to get there, Hosam says, he will have to pay smugglers €6,000. Photograph: Stephen Starr

Hosam Hamada is somewhere on the open Mediterranean Sea, the hope of a new life and the black water below for company. He and his fellow migrants – fleeing war zones and oppression in Syria, Iraq and even as far away as Burma – expect to arrive at the Sicilian coast sometime this weekend, if all goes well.

Hosam (19) is from Damascus and boarded a boat outside the Turkish city of Mersin in the dead of night this week after travelling alone from the Syrian capital five months ago. His predicament at home is a common one for young Syrian men: impending military service and the almost certainty of death that accompanied life on the frontlines.

On Thursday, Hosam’s smuggler contacts were due to collect him in a car and take him to a boat that will, in four days, reach the promised land of the European Union. The smugglers, he says, are Syrian and Syrian-Palestinian, and they’ve charged him $6,000 for passage, which he will pay upon arrival in Sicily. So many have attempted this journey and so many have failed.

Hosam first contacted the traffickers a week ago through a neighbour from Damascus who had already made the trip. For Hosam that was good enough – if his neighbours could do it, it could work for him, too. The smugglers charge $6,000.

“When the time is right they will come and collect me,” he says. “Tomorrow the plan is that I pack and prepare myself, and when it’s time the smuggler will take me to a gathering point, but I don’t know where.”

Despite handing over what amounts to a small fortune, Hosam is wary of the traffickers.

“I’ve heard many bad stories about the smugglers and what they do. I don’t trust them at all,” he says. “They will try to take my mobile phone, all our phones once we get on the ship, but I will hide mine.”

Many Mediterranean launches are made from the town of Erdemli, 35km west of Mersin. The Seyhan river, which runs through the neighbouring city of Adana, is also used to ferry migrants from inland out to ships anchored at sea.

Libya aside, Turkey has become ground zero in one of the world’s worst human trafficking epidemics, where it has also become a lucrative trade.

“We ran 14 missions in one night. Due to most weather and sea conditions, July, August and September are preferred” by smugglers, a Turkish coast guard colonel told local media last month. “Smuggling methods have changed . . . the 40- to 50 year-old Syrians are buying ships.”

In Erdemli, 22ft fishing boats can be bought for €25,000 in Erdemli. Able to carry dozens of migrants at a time, smugglers need only secure a handful of customers to receive a return on their initial investment. It was one of these models that sank north of Istanbul last November, drowning 24 Afghan men, women and children attempting to reach Bulgaria.

Smaller, 4m boats are used to smuggle migrants between western Turkey and the Greek islands and mainland, where 636 migrants were rescued two weeks ago. These tiny dinghies are often inflatable or made of fibreglass, and designed as back-up for emergency situations on larger boats. Migrants are charged €810 for passage on these.

All ships used by traffickers in Turkey have previously been decommissioned. According to ship brokers, no licence or background check is required to buy vessels capable of making millions for traffickers and drowning hundreds at once.

“You can individually buy a ship with your ID or passport,” said a broker at an Istanbul-based brokerage company.

Authorities have had some recent success in attempting to stop traffickers, with four men sentenced to 30 years in prison each last month for their involvement in the deaths of 24 migrants in international waters two years ago.

However, smugglers in Turkey continue to openly use Facebook pages to advertise contact phone numbers, costs and trip journey specifics, and even to take queries.

Though the number of migrants being rescued appears high, it is a fraction of the overall movement of Syrians and other desperate peoples to Europe. More than 170,000 migrants made it across the Mediterranean last year.

Hosam hopes to reach Milan and then travel to northern Europe, where some friends have already laid down roots. “Four of my neighbours from the same family in Damascus have already made the trip,” he says.

But first he must defeat the sea, where so many have failed.