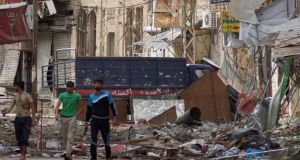 Syrian rebels yesterday accused the military of deploying chemical weapons in an attack on Otaiba town near Damascus as the government rejected an appeal to widen the scope of an earlier investigation into allegations that such weapons have been introduced into the Syrian conflict.

While a UN team of experts remained in Cyprus, UN secretary general Ban Ki-moon appealed to the government to extend full co-operation but the official Syrian news agency Sana cited an official who said that Syria “cannot accept such manoeuvres [by the UN], bearing in mind the negative role it played in Iraq [by clearing] the way for the American invasion of that country in 2003”.

The official said Syria had requested a “neutral and honest technical team” to visit a specific village and investigate a specific incident.


Original inquiry
The original inquiry was mandated last month after the government accused rebels of staging a chemical attack on Khan al-Assal village in Aleppo province. The rebels blamed the government. However, some analysts argue that they have secured chemical agents from Libyan stocks as well as conventional weapons.

The emir of the Islamic state in Iraq, Abu Bakr al-Baghdadi, has proclaimed proudly that Jabhat al-Nusra, the most effective rebel group involved in the Syrian conflict, is a branch of his organisation.

He said the Iraqi wing dedicates half its budget to Syria and implied that he would be in charge of both groups.

While the connection has been public knowledge for many months, these al-Qaeda affiliates, branded “terrorist” groups by the US, will merge under the name of the Islamic State of Iraq and Sham, Greater Syria. A website linked to the Jabhat confirmed the merger. This could suggest al-Qaeda’s intention of extending its armed struggle to other states in this region, notably Lebanon and Jordan where al-Qaeda already has a presence.

Iraqi officials say jihadi factions share three training compounds, logistics and weapons along the Syria-Iraq border and plan to create a “safe zone” from which to mount operations in both Iraq and Syria.

In London, Syrian opposition figures are set to meet British foreign secretary and other G8 ministers.