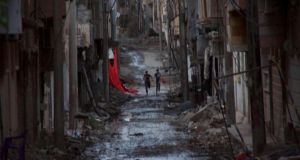 People run down a street in the city of Deir al-Zor, in eastern Syria, Photograph: Reuters/Khalil Ashawi

Syria’s armed forces seized the rebel stronghold of Qusayr after weeks of fighting as President Bashar al-Assad welcomed the Russian-US call for an international conference. He said Damascus supported any effort to halt violence and launch dialogue between the government, opponents and rebels.

Syrian regular forces yesterday captured the main square and municipality building of Qusayr, which is 10km inside Syria on the smuggling route used by rebel fighters travelling from Lebanon to Homs. It straddles the route from Damascus to the coast.

The long-expected operation, launched after air strikes and shelling, was reported by both state television and the opposition, which claimed that fighters from the Lebanese Shia Hizbullah movement had joined battle on the side of the army while Lebanese Sunnis had reinforced the rebels. Up to 70 people have been reported killed.

Last weekend, the air force dropped leaflets calling upon civilians to leave by a secure route established by the army but it is not clear if anyone did. Christians, who accounted for about half of the inhabitants, were expelled last summer when rebels seized control.


Ready for dialogue
In a rare interview with Argentinian media, President Assad declared that the government would “engage in dialogue with all political entities, internal or external with no set preconditions”, including “armed groups who lay down their weapons and renounce terrorism”. However, he charged Israel with directing rebel movements and expressed scepticism over the “intentions of certain western administrations” as well as Qatar and Turkey due to their “continued support of terrorist groups inside Syria”.

He said negotiations could not include “terrorists”, although he would deal with rebels “who lay down their weapons and engage in constructive political dialogue”.

The priority of the conference should, he said, be “an immediate cessation of funds and weapons” to the rebels and halting the entry of foreign fighters into Syria, particularly from Turkey. Once this was achieved, it could be possible to agree to a political solution involving a “new constitution and new laws”.

He said the armed groups consisted of “hundreds of small . . . militias” rather than a single autonomous group. These militias were made up of “convicted criminals, drug smugglers and fundamentalist factions”, each with its own leader.

On the opposition and western demand to stand down ahead of the formation of a transition government, he said the “Syrian people will decide whether I remain in office or not . . . through the presidential elections in 2014.”

He warned that fundamentalists fighters in Syria adhered to the “extremist” Wahhabi ideology which Qatar and Saudi Arabia seek to export but said that the Syrian notion of Islam “is very moderate . . . we reject and resist these extremist ideologies that they are trying to instil in Syrian society.”

Arab foreign ministers are set to meet with US secretary of state John Kerry and opposition figures on Wednesday to plan the conference, while the Arab League committee on Syria meets on Thursday to discuss the US-Russian proposal.