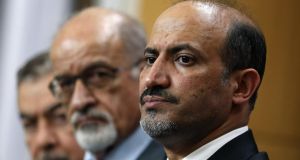 Syrian opposition leader Ahmad Jarba looks on during a news conference in London on Monday following a meeting by foreign ministers from the Friends of Syria group of states. Mr Jarba has close links with Saudi Arabia. Photograph: Suzanne Plunkett/Getty Images

The US-Russia sponsored conference on the Syrian crisis is in jeopardy due to the refusal of the Western- and Arab-backed opposition National Coalition to agree to attend. The coalition’s general assembly is set to meet early next month to decide, but the auguries are not good.

While the coalition is likely to come under strong pressure to participate from the US, Europe and Russia, which seek a negotiated end to the conflict, Saudi Arabia and Qatar could exert countervailing pressure to stay away. Riyadh and Doha see the military option as the only certain means of toppling Syrian president Bashar al-Assad.

The coalition, an umbrella grouping of expatriate and domestic opposition factions, enjoys strong support from Saudi Arabia and Qatar.

The coalition is headed by Ahmed Jarba, a Syrian tribal figure with Syrian-Saudi nationality and close links to Saudi Arabia.

Jarba is also a member of the Syrian National Council, the original grouping of expatriate factions opposed to the regime which was incorporated into the coalition, founded last year, with the aim of ending factional division and broadening popular appeal. This has not, however, resolved disputes within the opposition which is divided into Saudi, Qatari and Muslim Brotherhood camps.

Riyadh angered
Riyadh was angered over the US decision to opt for the destruction of Syria’s chemical weapons rather than military action against the regime in retaliation for its alleged use chemical weapons against two Damascus districts in August.

Saudi intelligence chief Bandar bin Sultan has said the kingdom, Washington’s oldest ally in the region, will distance itself from US policy due to the administration’s failure to back Riyadh’s 2011 intervention in Bahrain; failure to act decisively on the Syrian crisis and the Palestinian-Israeli conflict; and Washington’s efforts to build bridges with Tehran.

Sunni Saudi Arabia regards Shia Iran as its major competitor for the loyalty of Muslims in this region and the wider Muslim world and is eager to see Tehran lose its long-standing ally, Assad’s Syria.

Fearing an Iranian, Iraqi, Syrian and Lebanese Hizbullah axis, Saudi King Abdullah has urged the US to employ military action against Iran to halt its nuclear programme.

Riyadh signalled its intention to pull back from the US by rejecting a non-permanent seat on the UN Security Council after lobbying for the seat for a year. Revision of ties with the US could impact Saudi investment in US treasury bonds and real estate, oil sales and arms purchases as well as regional policies.

Saudi Arabia could step up weapons deliveries to Syrian Salafi fundamentalist factions despite US warnings that such weapons could end up in al-Qaeda-linked jihadi hands.

To counter al-Qaeda’s growing influence in Syria through the Islamic State of Iraq and Syria and Jabhat al-Nusra, the most successful on the battlefield, Riyadh has promoted the formation of the Army of Islam by 50 Salafi fundamentalist brigades in the Damascus area. However, co-operation among local Salafi militias, Free Army units and jihadis, as well as jihadi purchase of weapons, has meant that jihadis have secured a large proportion of Saudi arms sent to Syria.

They are also the recipients of arms and funds from wealthy Saudis, Kuwaitis, Emiratis and Qataris. Unless the Saudis exert their influence, Riyadh will be unable to curb jihadis tied to al-Qaeda, defeating its efforts to do so.