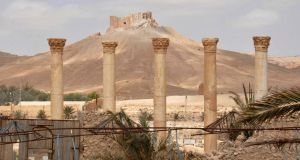 Syrian government forces backed by Russian air strikes battled Islamic State insurgents around Palmyra on Monday, trying to extend their gains after taking back control of a city whose ancient temples were dynamited by the ultra-radical militants.

The loss of Palmyra on Sunday is one of the biggest setbacks for the jihadist group since it declared a caliphate in 2014 across large parts of Syria and Iraq. It is also a major victory for President Bashar al-Assad and ally Russia, casting them as critical to the international fight against Islamic State, also known as Isis.

The Syrian army said the city, home to some of the most extensive ruins of the Roman Empire, would become a “launch pad” for operations against Isis strongholds in Raqqa and Deir al-Zor, further east across a vast expanse of desert.

Syrian state media said on Monday that Palmyra’s military airport was now open to air traffic after the army cleared the surrounding area of Isis fighters.

“Now there is a convergence of interests worldwide about the fact that Isis really needs to be confronted. It is a strategic defeat for Isis and by default a strategic victory for Assad and Putin,” said Fawaz Gerges, a Middle East expert at the London School of Economics. “It feeds into Assad’s narrative about Syria being a bulwark against Islamic State.”

There were clashes northeast of Palmyra between Islamic State and forces allied to the government, supported by Syrian and Russian air strikes, according to the Syrian Observatory for Human Rights, a Britain-based body which monitors the war.

Air strikes, believed to be Russian, also targeted the road running east out of Palmyra towards Deir al-Zor, it said.

UN secretary general Ban Ki-moon, speaking in Amman, said he was “encouraged” that Syrian government forces had been able to drive Isis out of Palmyra and that the city’s ancient heritage could now be preserved.

But the Syrian opposition said it feared Mr Assad’s forces were using a fragile cessation of hostilities in the wider conflict to make territorial gains.

“I fear one thing: that the period of the truce will allow the Assad regime to gobble up what remains of Syria by liberating areas that are controlled by Daesh [Islamic State] and Nusra,” said Riad Nassan Agha, a member of the opposition High Negotiations Committee.

The truce, accepted by Assad’s government and most of his foes, is the first of its kind since the war began five years ago and has been accompanied by the first peace talks attended by the warring sides. It does not apply to areas held by Islamic State or the Nusra Front, the Syrian branch of al-Qaeda.

The Syrian government is likely to use its success in Palmyra to bolster its negotiating position at the peace talks in Geneva, underlining that it is a necessary partner in the fight against Isis.

The United States is leading an international campaign of air strikes against Isis in both Syria and Iraq but has refused to cooperate with Mr Assad’s government.

Bashar Ja’afari, the Syrian envoy to the Geneva talks, said in an interview with Lebanon-based al-Mayadeen TV that it was time for powers including Washington to join Moscow in working with Damascus.