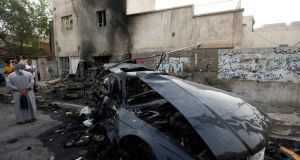 People stand at the site of a car bomb attack outside an ice cream parlour in the Al-Mashtal district in Baghdad yesterday. Violence escalated today when 28 people were killed by a suicide bomber in a Baghdad cafe. Photograph: Reuters

A suicide bombing at a cafe in a Baghdad neighbourhood has killed 28 people and wounded 45 others, according to officials.

Police officials said the attack saw a suicide bomber ram his explosive-laden car into a busy cafe in Baghdad’s primarily Shia Amil neighbourhood. Police said that the cafe and nearby shops were damaged in the attack.

Violence has been on the rise in Iraq following a deadly crackdown by security forces on a Sunni protest camp in the northern town of Hawijah in April.

Places such as cafes, markets and mosques are favorite targets for insurgents in Iraq.

Earlier a car bomb and an assault on a local council building killed at least 10 people, according to officials.

The deadlier of the attacks was in a village north of Baghdad where a car bomb targeted a police officer’s house, killing his father, brother and five nephews aged between seven and 11.

A police officer said six others were wounded. The officer was not in the house. Security forces meanwhile foiled an attack on the local council of the western town of Rawah by five would-be suicide bombers disguised in police uniforms, said Muthana Ismail, head of the local security committee.

He said two attackers were shot while the rest blew themselves up outside. Two policemen and an official were killed and 20 people wounded, he added.