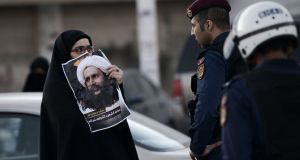 A Bahraini woman holds a picture of Shia cleric Nimr al-Nimr during a protest after his execution by Saudi authorities. Photograph: Mohammed Al-Shaikh/AFP/Getty Images

As the political crisis deepened over the execution of dissident Shia cleric Nimr al-Nimr, Bahrain and Sudan on Monday followed the lead of their Sunni ally Saudi Arabia and severed relations with Iran.

The escalation came a day after the Gulf kingdom cut its ties with Iran in response to the torching of the Saudi embassy in Tehran. Protesters set fire to the building following demonstrations over the killing of Nimr, who was an outspoken critic of discrimination against Saudi’s Shia minority.

The US, UN and EU have all condemned the decision to execute the firebrand cleric, which has reignited simmering tensions between the two regional superpowers. Ayatollah Ali Khamenei, Iran’s supreme leader, has said Saudi would face “divine vengeance” for the “unjustly spilled blood” of Nimr.

A statement reported on Monday by Bahrain’s official news agency cited Iran’s “continuing and dangerous interference in the internal affairs of Bahrain, Gulf states and other Arab nations”. Diplomats were given two days to leave the Sunni-ruled Gulf monarchy.

Also on Monday, the United Arab Emirates downgraded its diplomatic representation in Iran, but stopped short of cutting ties.

The crisis has fuelled a power struggle between Saudi and Iran, particularly in Syria, Iraq and Yemen, where the pair accuse each other of fanning the flames of sectarian war between Sunni and Shia Muslims.

Nimr was put to death on Saturday along with dozens of Sunnis convicted in Saudi Arabia of terrorism offences, sparking protests in Tehran, Bahrain and in Saudi’s eastern province. Shia make up about 10 per cent of the population of the Sunni kingdom.

Russia on Monday urged Iran, Saudi Arabia and the other Gulf states to exercise restraint and offered to mediate between Tehran and Riyadh.

“We are convinced that difficulties and disagreements . . . must be overcome through dialogue . . . Russia, for its part, is ready to render necessary assistance to such efforts,” the foreign ministry said in a statement.

Shia villages in Sunni-ruled Bahrain, which has been rocked by dissent among its majority Shia population for years, have been the site of large demonstrations since the death of Nimr, a supporter of the Bahraini pro-democracy uprising of 2011. The dissent four years ago was crushed after Saudi-led Gulf troops reinforced the crackdown. Riyadh has said Shia Iran was behind the uprising, an accusation denied by protesters.

Sudan’s decision reflects its pivot from Iran to Saudi Arabia over the past 18 months. Until mid-2014, Khartoum and Tehran had close ties, signing a military co-operation agreement in 2008 and expanding an Iranian naval base in Port Sudan.

But in 2014 Sudan closed several Iranian cultural centres. Last year it joined Saudi Arabia’s coalition against the Tehran-backed Houthi rebels in Yemen, sending troops to join the campaign to restore Abd Rabbu Mansour Hadi, Riyadh’s ousted ally. Riyadh – and Qatar, another Sunni state – have given Sudan, whose economy is in a parlous state after 18 years of international sanctions, more than €2 billion.

The UAE has joined Saudi in adopting a more muscular regional foreign policy to fill the security vacuum left by the upheavals of the Arab revolutions.

“This exceptional step has been taken in the light of Iran’s continuous interference in the internal affairs of Gulf and Arab states,” a foreign ministry statement said.

Nimr was sentenced to death in 2014 after being convicted of “inciting sectarian strife” in what Amnesty International called a flawed trial. He had been arrested in 2012 and charged initially with banditry after security services claimed he had opened fire on them.