Pope calls for end to ‘spiral of death’ in Syria 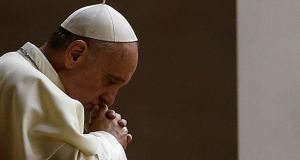 A sombre-looking Pope Francis made an impassioned appeal to avert a widening of Syria’s conflict today, urging world leaders to pull humanity out of a “spiral of sorrow and death”.

Francis, who two days ago branded a military solution in Syria “a futile pursuit”, led the world’s 1.2 billion Roman Catholics in a global day of prayer and fasting for peace in Syria, the Middle East and the world.

“Violence and war lead only to death, they speak of death! Violence and war are the language of death!” Francis said at the midpoint of a five-hour prayer service before tens of thousands of people in St Peter’s Square.

The United States and France are considering military action against Damascus to punish president Bashar al-Assad for a chemical weapons attack on Aug. 21 that killed hundreds of people. Assad’s government denies it was responsible.

The service was punctuated by music, prayer, the reciting of the rosary and long periods of silence in which the participants were asked to meditate on the need for peace to vanquish the destruction of war.

“We have perfected our weapons, our conscience has fallen asleep, and we have sharpened our ideas to justify ourselves. As if it were normal, we continue to sow destruction, pain, death!” said Francis, who wore his simple white cassock instead of ceremonial robes to the service.

“At this point I ask myself: Is it possible to change direction? Can we get out of this spiral of sorrow and death? Can we learn once again to walk and live in the ways of peace?”

He then asked “each one of us, from the least to the greatest, including those called to govern nations, to respond: Yes, we want it!”

When he announced the prayer vigil last Sunday, Francis asked Catholics around the world to pray and fast and invited members of other religious to take part in any way they saw fit in the hope that a wider war could be averted.

“That’s very scary, very scary,” said Lennie Tallud, a clinical lab scientist visiting St Patrick’s Cathedral in New York. Asked whether she thought prayers would make a difference, she said: “Definitely, for sure. No doubt. I think it would - 100 percent.”

Yaha Pallavicini, a leader of Italy’s Muslim community, attended the prayer service with other Muslims.

“Praying for the intention of peace is something that can only help fraternity and, God willing, avoid more war,” he told Reuters. “As Muslims who want peace we have to work so that the values of faith and dialogue prevail over the destruction of peoples.”

In his address, the pope, who for most of the service sat silently behind an altar on the steps of the largest church in Christendom, stressed the power of prayer to change the world.

“This evening, I ask the Lord that we Christians, and our brothers and sisters of other religions, and every man and woman of good will, cry out forcefully: violence and war are never the way to peace!” he said.

“Let everyone be moved to look into the depths of his or her conscience and listen to that word which says: Leave behind the self-interest that hardens your heart, overcome the indifference that makes your heart insensitive towards others, conquer your deadly reasoning, and open yourself to dialogue and reconciliation,” he said.

1 Gardaí disperse crowds gathered at coastal beauty spots
2 How lockdown has helped us to save money - and find new ways to spend it
3 George Floyd death: Man shot and killed by law enforcement in Kentucky
4 Six counties free of new cases of Covid-19 over past week
5 Schools may reopen in July for children with special needs
Real news has value SUBSCRIBE