Pope again appeals for peace in Syria and Middle East 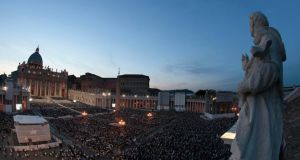 Just hours after he led 100,000 faithful in a vigil of prayer and fasting for peace in Syria, Pope Francis this morning again issued an impassioned appeal for peace not only in Syria but also in the entire Middle East region.

Making his Sunday Angelus address in St Peter’s Square, Francis thanked all those who had attended last night’s prayer vigil but he called on everyone to continue to pray for peace, saying: “The campaign goes on: we must continue with prayer and with calls for peace. I invite you to keep on praying so that the violence and devastation in Syria stops and so that people work with renewed commitment for a just solution to this fratricidal conflict…”

During his four-hour prayer vigil last night, the Pope had argued that “forgiveness, dialogue and reconciliation… are the words of peace, in beloved Syria, in the Middle East, in all the world”.

This morning, the Pope re-emphasised his concern about the Middle East, calling for “stability” in Lebanon, an end to violence in Iraq, for a “decisive peace process” between Palestinians and Israelis and for Muslims and Christians in Egypt to come together for the good of the country.

“The search for peace is a long one and it requires much patience and perseverance”, he concluded.

Dressed in simple white, and eschewing ceremonial robes, Francis had looked serious and sombre as he sat through yesterday evening’s long ceremony in St Peter’s Square.

For much of the time, he sat silently without even his white papal zucchetto (skull cap) on his head, looking for all the world like someone who had just slipped in off the street to say a quiet prayer in a pew at the bottom of the aisle.

Recalling the Genesis story of the killing of Abel by his brother Cain, the Pope said that “we bring about the rebirth of Cain in every act of violence and in every war”.

Even today we continue the history of conflict between brothers, said the Pope, adding: “As if it were normal, we continue to sow destruction, pain, death! Violence and war lead only to death, they speak of death…”

Appealing to Christians, to “our brothers and sisters of other religions”, to men and women of good will, Francis called on them to “cry out forcefully that violence and war are never the way to peace”.

The unrelenting peace campaign being conducted by Francis recalls similar appeals made by Pope John Paul II on the eve of the US-led military interventions in Iraq in 1991 and in 2003.

Even though neither the US nor any other western power were named, Francis, like John Paul II before him, is clearly aiming the thrust of his peace campaign against any US-led military intervention in Syria.