Palestinian refugees in Syria risk typhoid if UN is kept away 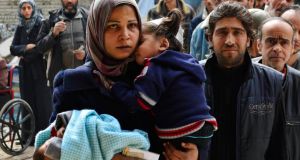 Palestinians displaced from Syria’s largest UN camp, in the flashpoint Yarmouk district south of Damascus, face an outbreak of typhoid that could spread to the capital if the UN Relief and Works Agency (Unwra) continues to be denied access to them.

The refugees have settled temporarily in Yalda and other nearby towns controlled by armed groups that have reached truces with the government. These groups have strong leaders and civilian committees that co-operate with UN agencies.

Between April 13th and June 8th, Unwra and other UN missions could take whatever was needed into these areas. Unwra delivered 6,000 food parcels each month. Civilians who had stayed in Yarmouk could go to Yalda for food and healthcare.

On June 8th, this changed, apparently due to assassinations in Yalda, presumably by insurgents. Unwra lost access to host areas and was no longer allowed to distribute food and potable water or provide medical services.

Elsewhere in Syria, Palestinians in the camp near the southern city of Deraa have been displaced as have Palestinians living in a small Aleppo camp. The large Neirab camp, east of Aleppo city, is under government control. There are 10,000 Palestinians in Aleppo where there is no electricity or water.

The agency is bracing itself for the deterioration of the situation in Deraa and Aleppo. “All humanitarian agencies are going downhill rapidly,” an informed source told The Irish Times.

Before the conflict erupted in 2011, there were 560,000 Palestinian refugees registered with Unwra in Syria, today there are 480,000, 95 per cent of whom are in constant need of aid. Jordan and Lebanon have both closed their borders to Palestinians, trapping them in a war zone or forcing them to resort to people smugglers to escape to Turkey and set sail for Europe in fragile boats.

Unwra requires $414 million (€378 million)this year to meet the needs of refugees in Syria alone; the agency’s 2014 appeal for Syria was only half funded.

Throughout the region, the perpetually underfunded Unwra will have to postpone the academic year at 700 schools for half a million students unless donors deliver $101 million next month. The source said this sum should be negligible for countries participating in the US-led campaign against Islamic State in Syria and Iraq, which has cost more than $5 billion.

Unwra Commissioner General Pierre Krähenbühl warned, “Such a decision would generate much anxiety and despair for . . . boys and girls deeply dedicated to their studies. Education lies at the very heart of the identity and dignity of Palestinian refugees.”

Well aware of its importance to hundreds of thousands of Palestinian families, Unwra devotes half of its budget to education. The agency’s schools ensure continuity and stability for children in conflicted Syria and Gaza, unstable Lebanon, the Israeli-occupied West Bank and East Jerusalem, and Jordan, heavily burdened by both Palestinian and Syrian refugees.

Over the past decade, donor contributions have not matched population growth, causing shortfalls for the agency’s three primary services: relief, healthcare and education. Unwra, which offers protection and services to five million refugees overall, has just enough money to fund the first two programmes as well as emergencies but not to provide for schools to open in September.