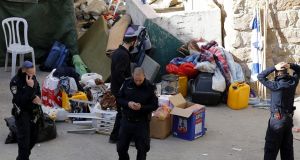 Settlers and securioty forces wait in a patio as settlers are removed from two buildings near the Cave of Patriarchs in the West Bank town of Hebron. Photograph: Abed Al Hashlamoun/EPA

Large numbers of Israeli security forces evicted about 80 Jewish settlers from two buildings they had entered the previous day in the flashpoint city, claiming the buildings had been legally purchased from their Palestinian owners, even though Israel’s defence ministry had withheld permission for the settlers to move in.

After the settlers were evicted, troops sealed the doors of the structures, which the police said would remain closed until the courts ruled on their ownership.

Palestinians claimed the homes had been taken over illegally and clashes erupted with Israeli troops soon after the settlers moved in. Some 1,000 settlers live in the Jewish enclave in Hebron, the largest West Bank city, guarded by a heavy Israeli military presence, surrounded by some 220,000 Palestinians in areas controlled by President Mahmoud Abbas’s Palestinian Authority.

The ancient biblical city is home to the cave of the Patriarchs, a holy site revered by Jews that sits alongside the Ibrahimi mosque, worshipped by Muslims as the sanctuary of Abraham.

Defence minister Moshe Ya’alon, from Mr Netanyahu’s ruling Likud party, was quick to order the eviction of the settlers, accusing them of breaking the law.

“Israel is a nation of laws, and I have no intention of compromising when the law is broken,” he said in a statement. “In the case of the homes in Hebron, the law was brazenly broken. In order to occupy a house one must carry out several legal steps, none of which were carried out here. For this reason, the intruders were evacuated.”

Three Likud Knesset members and the right-wing Jewish Home threatened to boycott coalition votes unless the settlers were allowed to return to the buildings. Mr Netanyahu’s coalition enjoys a 61-59 majority in the 120-seat Knesset, leaving a major headache for the government which has been in power for under a year.

Knesset members Bezalel Smotrich, from the Jewish Home, and Oren Hazan and Ayoob Kara, both from the Likud, said they would refrain from being present at votes.

Likud tourism minister Yariv Levin said the decision to remove the settlers was “scandalous.” The Hebron settlers committee said they would continue the struggle until they won ownership. “The government persists in a serious, anti-humane policy and keeps Jews from every possibility of developing the settlement in Hebron,” they said in a statement.