A land grab by Iraqi Kurds could intensify the civil conflict 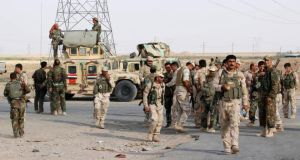 Members of the Kurdish security forces take part in an intensive security deployment on the outskirts of Kirkuk. Photograph: Reuters/Ako Rasheed

Iraqi Kurdish forces have taken advantage of the sweeping offensive mounted by the Islamic State in Iraq and Syria (Isis) to seize control of the oil hub of Kirkuk and its hinterland. A city claimed by the Kurds as their cultural capital and part of their traditional homeland, Kirkuk is also the site of Iraq’s original oil fields, which began yielding crude in 1927.

Kurdish peshmerga – military forces – have long been deployed around Kirkuk, which lies 83km south of Irbil, the administrative centre of the three-province Kurdish autonomous region. The Kurds are determined to expand this region by annexing “disputed” territory in the adjacent provinces of Tamim (Kirkuk), Salaheddin, Dyala and Nineva.

them is Arab and Turkoman (ethnic Turk) rather than Kurdish. But Peshmerga (defence) ministry secretary general Jabbar Yawar made it clear that his troops had already established new facts on the ground, saying: “Peshmerga forces are in control of most of the Kurdistan region outside of [Kurdish regional government] administration.”

Kurdish peshmerga minister Jaafar Mustafa said Kurdish areas would not be menaced by Isis, and revealed that the Iraqi government had refused peshmerga help in defending Mosul, which fell to Isis on Tuesday. Mosul is also claimed by the Kurds.

The Kurdish move is not without risk. Mustafa was targeted by and survived a roadside bomb on Thursday while inspecting units in Tamim province. Baghdad, the Isis and Arab and Turkomen factions will resist a Kurdish land grab, intensifying ongoing civil conflict.

The capture of Mosul by Isis has already prompted 500,000 residents to flee, a large proportion of them to Irbil. The establishment of an Isis-run “Islamic emirate” could provoke the migration of millions into the Kurdish region, which already hosts tens of thousands of Iraqi Christians fleeing insecurity, as well as 250,000 Syrians, the majority Kurds, who have sought sanctuary in the Iraqi Kurdish region. The burden could become too great.

The most stable and secure in Iraq, the Kurdish region is booming economically and attracting foreign investment, but the region’s success could be short-lived if simmering territorial and oil disputes flare. Last month the Kurds began exporting oil through a new pipeline to Turkey despite a rift with Baghdad, which argues that Iraq’s oil can be sold only through the national oil company. In response, Baghdad has suspended budgetary payments to Irbil and threatens to hail the Kurds before the UN over oil exports.

The emergence of a Kurdish superstate encompassing the “disputed” lands, could prompt Syrian and Turkish Kurds to join Iraqi Kurdistan and fracture Iraq into Kurdish, Sunni and Shia statelets, precipitating mass ethnic and sectarian cleansing and refugee spillover into neighbouring states.

Minorities elsewhere in the region could also opt for separate entities to escape conflicted coexistence.