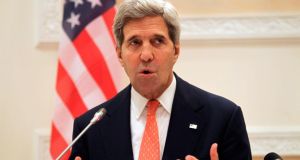 John Kerry, who will meet separately with Palestinian president Mahmoud Abbas and Israeli prime minister Binyamin Netanyahu, is exerting pressure on both sides to reach some kind of deal ahead of the tentative March deadline set by Washington. Photograph: Faisal al-Nasser/Reuters

US secretary of state John Kerry arrives in Israel today in an effort to breathe new life into the Israeli-Palestinian peace talks amid reports that Washington will present its own draft peace proposals in January.

The sides relaunched direct peace talks in July and have so far met more than a dozen times. The negotiations have been held in strict secrecy with almost no leaks on the details of the discussions.

However, the days preceding Mr Kerry’s arrival have been dominated by accusation and counter-accusation between the sides, with reports that little progress has been made in narrowing the gaps on the core issues.

Mr Kerry, who will meet separately with Palestinian president Mahmoud Abbas and Israeli prime minister Binyamin Netanyahu, is exerting pressure on both sides to reach some kind of deal ahead of the tentative March deadline set by Washington: if not a permanent status agreement, then at least an interim arrangement.

The US plan will reportedly be broadly based on the parameters set by former president Bill Clinton after the failure of the Camp David summit in 2000.

Speaking in Saudi Arabia, Mr Kerry said the US will maintain the Israeli-Palestinian peace track as Washington sees “no other plan.”

The latest issue to anger the Palestinians was Mr Netanyahu’s decision to prepare for the building of a security wall along Israel’s eastern Jordan Valley border with Jordan.


Demarcation line
The Palestinians have reportedly rejected Israel’s demand for a continued military presence along the border if the area becomes the future demarcation line between Palestine and Jordan.

Nabil Abu Radeineh, a spokesman for Mr Abbas, accused Israel of attempting to sabotage the Kerry visit. “The Israeli premier’s statements on building a wall . . . are only a proactive step to foil secretary Kerry’s visit.”

The Palestinians were also frustrated over Israel’s announcement to issue tenders for another 1,700 settler homes in east Jerusalem and the West Bank.

Israel’s chief negotiator Tzipi Livni said she opposed settlement construction but denied Israel had broken any promises to the Palestinians.

“ I think there is no need for it, I think it hurts Israel, which continues to be perceived as colonialist. But because we did not commit to a construction freeze Israel is not violating any commitments when it builds.”